Aileen is a full-time AmeriCorps member who serves at the REAL School on Mackworth Island. Currently
Aileen heads up the school’s Teen Aspirations Program where she is responsible for helping students develop work readiness skills. Aileen works tirelessly to insure that REAL School students have the background experiences that they need to find employment and meaningful work co-op experiences.

Aileen has broadened the REAL School’s presence in the communities that the school serves and has helped our students identify their passions and interests. 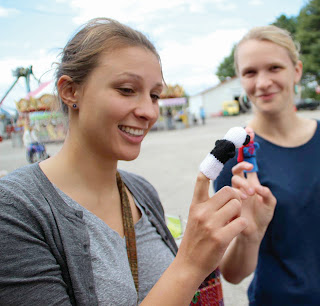 Aileen is a 2012 graduate of Bowdoin College with a BA in English and Spanish. At Bowdoin, Aileen was a publicity fellow at the McKeen Center for the Common Good. Since graduation Aileen has used her considerable skills in organizational outreach. Aileen spent some time in Massachusetts as an outreach communications intern at Allstron Brighton CDC. We are now thrilled to have her serving as a National Service AmeriCorps member at the REAL School.

In the month of November, Aileen broke ground with our students setting numerous students up with interviews, college readiness programming, and outreach. Aileen has made connections with a whole variety of businesses, non-profits and civic organizations that have increased the post secondary opportunities for REAL School students. In addition to being Teen Aspirations facilitator, Aileen helped to organize multiple fundraisers, and has supported classroom activities throughout the school.

Learn more about The REAL School at www.realschool.org.

Posted by Michelle Libby at 9:31 PM No comments:

Windham Police run "Drive Sober or Get Pulled Over" campaign through Jan. 1 - By Michelle Libby


The Windham Police Department has been given a $5,000 grant for the National “Drive Sober or Get Pulled Over” campaign, which began December 13 and will run for two weeks. It will continue for two weeks in August as well.


“Once a night until January 1st. We will be in different places running a saturation patrol. We hit the entire town,” said Sergeant Peter Fulton, who wrote the grant request. “There will be an extra patrol vehicle out to monitor the roadway looking for drunk drivers,” he said.

The national campaign is funded by the Maine Bureau of Highway Safety in Maine. Other area agencies are also involved like Westbrook for example. They are doing roadblocks, according to Fulton.

Windham has had 52 OUI arrests so far this year. Around 15 additional OUI arrests is what Fulton estimates they will have by January 1st. “The weather is not really cooperating with us,” he said. “It’s apparently keeping the drunks at home. I think a lot of people are award of the effort. That would be the best sign,” he added.

Local media outlets have been getting the word out to the communities about this program and Windham Police have posted information on its Facebook page and on the town website. “The public should be informed that departments are out there looking for drunk drivers,” Fulton said.

“It’s not like people intend to go out and kill someone,” Fulton said, but it does happen when one is drinking and driving.

Fulton recalled an event that happened just as he started working for Windham. A woman was on her way home as she crossed the intersection of River Road and Route 202 when she was hit head on by a drunk driver and killed. It was 5 p.m. on Christmas Eve and her car was filled with presents for her young children.
“That’s something that doesn’t go away. You don’t forget,” Fulton said.

Windham is also in the running for a $10,000 grant for speed enforcement, he said. We were chosen to apply because of the high number of accidents Windham has every year. The five year average is 477 accidents. The program will begin on January 2, so Fulton is hoping to hear next week if the department has the grant. The detail would run between January and September.

Posted by Michelle Libby at 9:26 PM No comments:

Student of the week - Christopher Adams


Christopher Adams who is 13, attends the REAL School, a part of RSU14 on Mackworth Island in Falmouth. The seventh grader said that math is his favorite subject, but his hobbies involve computer repair and video games.
“When I grow up I want to be a technology guy who fixes computers,” Adams said.

“Taking initiative and ownership of their own learning projects is the highest level of performance we can hope for from our students. This is exactly what Chris has done with his service to Meals on Wheels. Chris heard about the opportunity and volunteered to take on this project that delivers meals to homes in Freeport. I see a deep level of empathy and a sense of purpose in his work. Chris is new to us this year, and we are so happy with the way he has embodied our positive philosophies,” said AmeriCorps teacher volunteer Evan Joseph Kumagae.

“I like school so that I can spend time with friends, but education is important so that I can live a successful life,” Adams said. When he’s not in school, he’s home helping his mom, Marlene and playing video games with his siblings, Cody, Aaliyah, Steven, Jamie, Josh and David. He also lives with his father Dave Adams.

“I just started volunteering with Meals on Wheels, and I enjoy getting connected with the elderly residents,” Adams said.

Posted by Michelle Libby at 9:24 PM No comments:


Windham – December 5, 2013 – Mechanics Savings Bank donated $1,250 to the Sebago Lake Rotary Club. The funds will be used to support the 2014 Sebago Lake Derby on February 15-16th. The Ice fishing derby is a major fundraiser that benefits such charities as Camp Sunshine, DARE, Maine Inland Fisheries and Wildlife, Maine Children’s Cancer Program and many others. The derby is a nationally recognized event and is Maine’s largest ice fishing derby.

Mechanics Savings Bank was founded in 1875, as a mutual savings bank and has branches in Auburn, Brunswick, Lewiston and Windham. The bank remains committed to giving back to the communities it serves through charitable giving and volunteerism. In the past year, the bank supported more than 90 non-profit organizations with donations, scholarships, and sponsorships. Last year, the staff of 75 employees, volunteered more than 4,530 hours to organizations within Androscoggin and Cumberland counties. 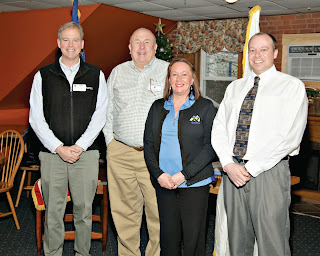 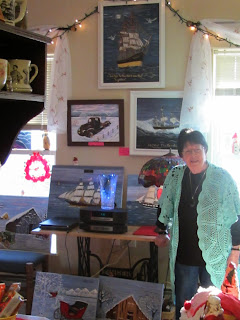 Local artist Diana Libby, who once owned The Broad Board on Route 302 in Windham, held an open house to share her latest paintings of Windham and Maine landscapes and renditions of scenes from books and poetry on Wednesday afternoon in her South Windham apartment.

She is inspired by history of the community and her family to paint with acrylics, often using photos from the past to paint by. Presently she is motivated by the writings of Henry Wadsworth Longfellow, a Maine poet and her own genealogy. She has painted numerous sailing schooners that were sailed by her relatives. She has also been the artist on display at the Windham Public Library.

Posted by Michelle Libby at 8:17 AM No comments: