A little history of revenue sharing. Revenue sharing came about in 1972, when the state took away the ability of a municipality to create local taxes. Revenue sharing was to take 5 percent of the money raised by sales tax, and using a formula, distribute those monies to local towns.

Columns
A – Shows the actual amount of revenue sharing distributed to municipalities fiscal year 2009.
This was the last year the State honored the 5 percent for revenue sharing.

B – Shows the actual amount of revenue sharing distributed to municipalities fiscal year 2013.
The 5 percent this year was $138 million, but towns only received $96 million.

C – In the fiscal year 2014 projections, our municipalities will receive $65 million which is $73 million less than the $138 million. The 2014 budget has a hole of at least $119 million which could cause these figures to change.

D – In fiscal year 2015 the projections are that revenue sharing will only be funded to the tune of $60 million or $20 million depending on the outcome of this year’s legislators. The MIL rates for D and E above are for the municipal side only and would apply if the whole loss of revenue sharing was passed on to the MIL rate.

The MIL rate (pronounced “mill”) is “the amount of tax payable per dollar of the assessed value of a property. Property tax in dollar terms is calculated by multiplying the assessed property value and the MIL rate and dividing by 1,000. As a property may be subject to tax by a number of different authorities, MIL rates are set by each taxing authority so as to meet the revenue projections in their budgets,” as told by www.investopedia.com.

There are bills in front of the legislator that would fund revenue sharing from fully-funded to not being funded at all. You can see how fluid the outcome is. Understand the dilemma of the municipality which is limited in their ability to raise revenue. Municipalities only receive revenue from three sources, the State (revenue sharing), excise tax and the real estate tax.

Looking at the above figures showing the loss of revenue sharing, which the State has kept and used to balance their budget (which is mandatory), you can see how frugal your municipal officials and town manager have been to keep your MIL rate down and still provide the services expected. The tax rate used above was the actual MIL rate for that year. Understand that the MIL rate is a combination of county tax, school tax and municipal tax. In Windham, revenue sharing is counted as revenue by the town and added to the municipalities’ general fund.

At present it looks as if the State is going to cut revenue sharing even more than projected in fiscal year 2015. As your town councilor, I ask for your help. Please contact your representatives and senator and ask them to vote to restore revenue sharing.

We as a council will only have two choices this budget season, pass the loss on to the real estate tax or cut services.

Please help. Send an email or call your local officials.

Posted by Michelle Libby at 4:58 PM No comments:

AUGUSTA – A proposal to keep Mainers healthier and increase access to family planning services advanced in the Legislature Thursday.

A majority of the Health and Human Services Committee members recommended the passage of the bill cosponsored by Rep. Jane Pringle, D-Windham.

The bill, LD 1247, would expand MaineCare eligibility for family planning services to Mainers with incomes of up to 200 percent of the federal poverty level, approximately $23,000 for a household of one.

Almost half of all pregnancies in Maine are unintended. Unintended pregnancies are associated with lower educational attainment, higher abortion rates and increased instances of abuse or neglect.

“Family planning clinics are often the only place where many women are able to receive care,” said Pringle, a member of the Insurance and Financial Services Committee and a retired physician. “By expanding availability of these services, we would increase the likelihood of detecting cervical and breast cancer among Maine women along with other potential health issues. This bill improves the health and the lives of Mainers across the state.”

The bill received strong support from prominent health and women’s rights organizations. The Maine Nurse Practitioner Association had testified in support of the bill, stating that family planning clinics also help to prevent complications such as infertility and the spread of STDs and HIV.

“As a practicing physician for 31 years in Maine and a member of the Health and Human Services committee, I strongly support this bill. It would help ensure access to family planning services in the state,” said Rep. Ann Dorney, D-Norridgewock, a co-sponsor of the bill. “Expanding access to family planning services is good for everyone, the children, the parents and society.”

All but two of the present members of the Health and Human Services Committee voted ought to pass. If you would like more information on the bill please visit: http://www.mainelegislature.org/LawMakerWeb/summary.asp?ID=280048139

Pringle is serving her first term in the Legislature and represents part of Windham.

Dorney is serving her first term in the Maine House and represents Madison, Norridgewock and Solon. She is a practicing physician and member of the Health and Human Services Committee.

Posted by Michelle Libby at 4:52 PM No comments:


Governor Paul LePage toured small businesses in the lakes region last Friday making stops at many small businesses in the area including Windham Weaponry, Windham Millwork and Time4Printing. Escorted by Senator Gary Plummer and Representative Thomas Tyler, LePage was given tours and spoke with many of the employees at each business.

Time4Printing and The Windham Eagle were a surprise stop on the itinerary, said Plummer.

“It was an honor for him to stop by and see what we do and to show his support for local businesses,” said Time4Printing and The Windham Eagle owner Kelly Mank. 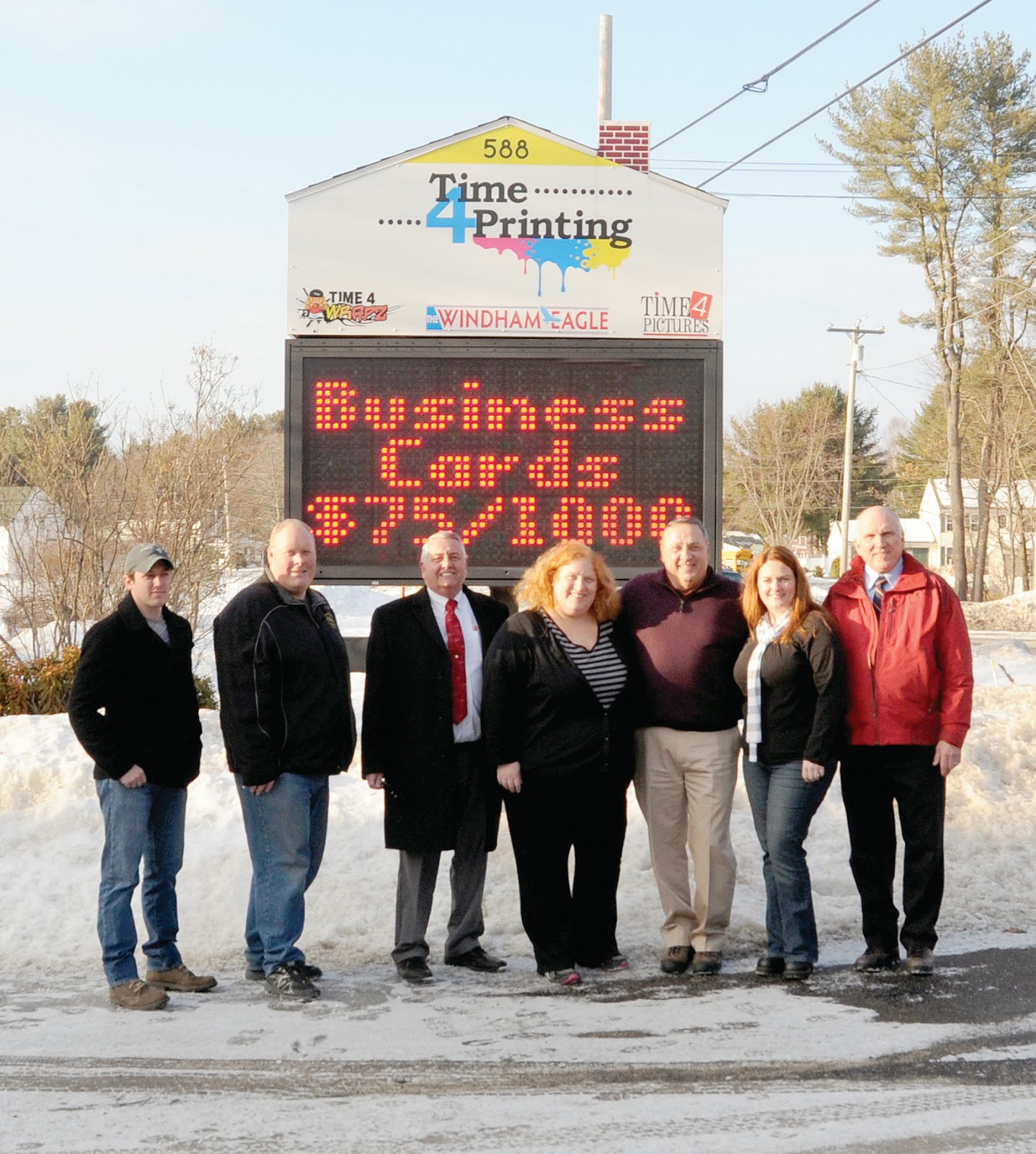 Larry spent his early years in Lewiston and was a 1971 graduate of Gorham High School, where he was class president all four years. Larry attended Boston University before transferring to and graduating from Bowdoin College. He received his JD from what is now the University of Southern Maine School of Law and was admitted to the Maine Bar Association.

After several years of practicing law in Portland and Windham, Larry and two partners founded the law firm of Sawyer, Sawyer and Minott, P.A., with offices in Windham and Gorham. A devastating fire at the Windham location eventually led to the construction of the office building at 17 Storm Drive, which was always a source of great pride. Larry represented many clients and corporations in the Lakes Region and beyond and was a well-respected litigator. He had recently become licensed to practice mediation.
Always a dedicated and hard worker, Larry could still identify the Gorham homes, where as a boy, he delivered newspapers on his bike. He helped put himself through college and law school by working for a construction firm.

Larry was always civic minded, beginning with his elevation to Eagle Scout while in high school. A resident of Portland in the early days of his career, he served on that city's Zoning Board of Appeals. When he and his wife, Andrea, moved from Portland to South Casco in 1987 he became involved in town affairs; he served as head of Casco's Zoning Board of Appeals for many years, as well as moderator for town meetings and in various capacities with the local Democratic party. As a member and director of the Lakes Region Chamber of Commerce, he had served on the executive board as clerk of the corporation since 1993 and was honored as its Business Person of the Year in 1996. He also proudly served on the board of Harvest Hills Animal Shelter.

Larry and Andrea were married at First Parish Church in Gorham in 1984, and he adopted her four children from a previous marriage. He was very proud of their children's success and delighted in their eight grandchildren.

Larry was predeceased by his father, Richard L. (Buz) Sawyer. He is survived by his wife, Andrea McCatherin Sawyer; and their children, Sarah Skillin Woodard and her husband Colin of Freeport, Charles E. Skillin III and his wife Jodi of Lancaster N.Y., Andrew M. Sawyer and his wife Amy of Raymond, and Ian P. Sawyer and his wife Gina of New Gloucester. He leaves granddaughters, Lauren Semo and Katie Skillin and grandsons, Aidan, River and Greysen Sawyer, Layne and Corbin Sawyer and Henry Woodard. He is also survived by his mother, Christine (Teena) Sawyer of Gorham; sister Margaret (Peggy) Meyers of Bath, brother and law partner, John W. Sawyer of Gorham, and brother, David H. Sawyer of Windham.
A service will be held at 11 a.m. on Thursday morning, Jan. 16, 2014, at First Parish Church, 1 School St., Gorham, with a reception directly afterward at the church fellowship hall. All are welcome. Arrangements are by Dolby Funeral Chapel, 434 River Rd., Windham. Condolences to the family may be expressed at www.dolbyfuneralchapels.com.

Posted by Michelle Libby at 1:30 PM No comments:

AmeriCorps volunteer of the month at the REAL School 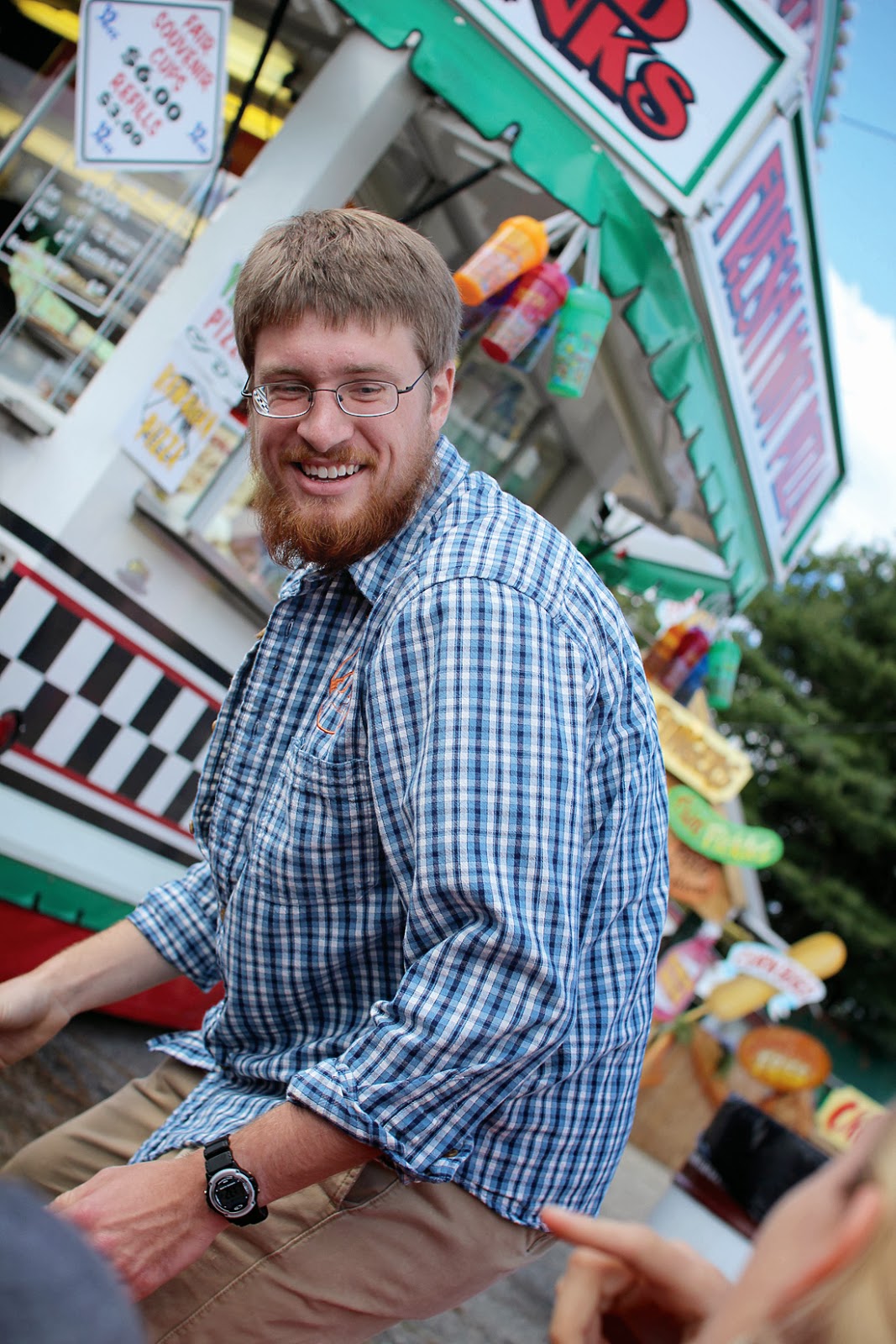 Max is a full-time AmeriCorps member who serves at the REAL School on Mackworth Island. Currently, Max serves as a classroom-based service-learning team leader. Max’s primary responsibilities include helping students with academic tasks, designing and implementing service-learning projects, and helping to differentiate learning for all students. Max is a 2013 graduate of Bowdoin College with a BA in Asian Studies and Classical Studies. At Bowdoin, Max was also the co-president of the Bowdoin Outing Club where he organized and taught whitewater kayak classes and led other wilderness adventures throughout the state. Since graduation, Max has lead youth programming in Wyoming, applied to graduate school, and served as an AmeriCorps member at the REAL School.
In the month of December, Max continued his pattern of excellence at the REAL School by being a stalwart member of our team. Max helped to design a specialized winter camping trip, helped coordinate fundraising efforts for ongoing service-learning projects, and helped veteran classroom teacher MarieReidman implement a differentiated literacy curriculum.

Learn more about us at www.realschool.org, or our Facebook page (www.facebook.com/
realschoolamericorps), or call Susan Burns Chong at 207-781-6207.

Posted by Michelle Libby at 1:27 PM No comments: