After 10 years and many projects and events, Brian Ross retired from Windham Parks and Rec Department on May 1. Over the 10 years he has worked on projects like the skatepark, Donna-Beth Lippman Park and Dundee Park, Summerfest, Lakes Region seniors groups and helped get the community gardens started.


“I really enjoyed my time in Windham. There are many dedicated and hard-working employees,” Ross said. 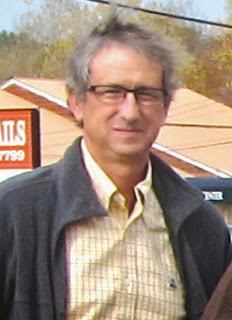 He is proud of the work with the community park at Donna-Beth Lippman Park off Route 302. He is also glad that they were able to renovate the bath house at Dundee Park.

“Commuting from York to Windham got to be too much,” Ross said. He felt it was time to move on and spend more time traveling and being outdoors. His daughters live all over the country and even the world.  “It will be nice to have the time to go see them when we can,” he said.

His favorite part of the job was programs and special events like the father/daughter dance and the mother/son event.

He worked closely with Scouts completing their Eagle projects and has five or six planned for this spring.

Ross sees the position filled by someone who can continue on the work he started with special events and Lippman Park, and who can plan for new projects like an athletic complex, which is something that Windham really needs. He would also like to see the Mountain Division Trail finished into Westbrook, but said that it will cost millions of dollars to complete.

Finally, he would like to see Windham have a gathering space for seniors, the community and teens.
“I was a pleasure working in Windham,” he concluded.
Posted by Michelle Libby at 9:14 PM No comments: 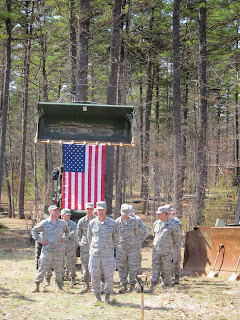 “The Pine Tree Council is striving to become the number one Scouting destination in the Northeast region and this IRT partnership is a key component to reaching that goal,” said Scannell.

Through the IRT program, military personnel from all over the country and two British Army Commandos, come to Raymond in partnership “where the Pentagon provides leadership, tradesmen, fuel, vehicles, and equipment for four months each summer.”

“This will be a place where young men come to learn skills that will last throughout their lives,” said Scannell, referring to Camp Hinds.

Scout executive and CEO Eric Tarbox addressed the gathering. “Founder [of Boy Scouts] Baden Powell did not come from a family of means.” Baden Powell dreamed of success through hard work, merit and achievement regardless of where they came from, Tarbox continued. Camp Hinds is within a day’s drive of 50 percent of the nation’s population and he’d like to see the camp a household name across the country. 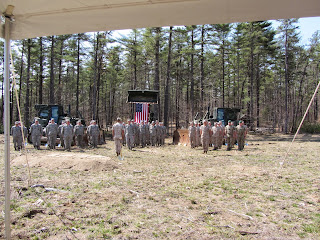 Colonel Eric Lind from the Maine Air Guard spoke about his experiences as a 10-year Scoutmaster with his sons, who are both Eagle Scouts, the highest rank in Boy Scouting. “It’s emotional and unbelievable. Something happens in a week down here without electronics. It’s magic,” he said.

“Hundreds of kids that come through here will talk about this for the rest of their lives,” he finished. 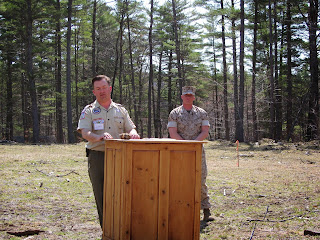 Horace Horton, the capital campaign co-chair and the current president of the board of directors for Pine Tree Council BSA, described the partnership as a “Once in a century opportunity to do what we are doing.” He also announced that Camp Hinds will be purchasing the last remaining piece of land on the other side of the Tenny River, thus expanding the camp.

Donors from all over were also in attendance. Tom Yost from Smith & Wesson has been a sponsor for the shooting sports programs at Camp Hinds and said he was “proud to be a part of the team.” 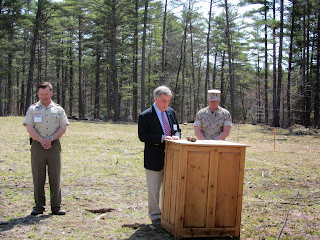 Joe Picoraro, vice president of PC Construction and an Eagle Scout, has been involved in Scouting for 25 years as a Scoutmaster and on all of his camping trips with his troop 23 to Camp Hinds he stayed in the Baden Powell campsite, which is now the new location of the dining hall. PC Construction donated all of the pre-planning services including estimating, scheduling and constructability reviews between the military and the Scouts. He predicts that in 10 to 20 years, the site of the dining hall will be the center of Camp Hinds.

Architect Janet Hansen with SMRT and Andrew Bradley the structural engineer from SMRT were both on hand to help in the groundbreaking. 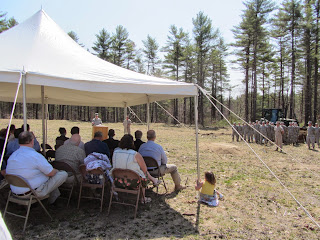 The Town of Raymond will also benefit from having the IRT staying at Camp Hinds. Town Manager Don Willard thanked the military for what they are doing for Raymond and the country.
“This is a great asset for us to have,” said Raymond assessing assistant Danielle Loring. 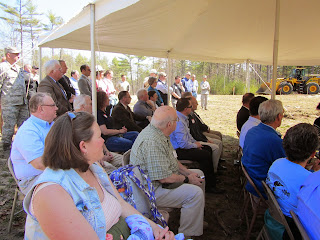 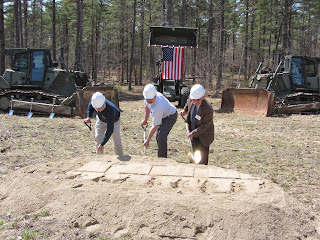 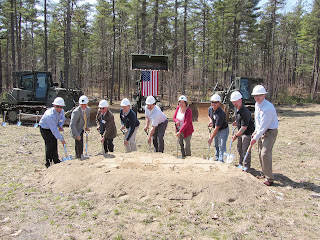 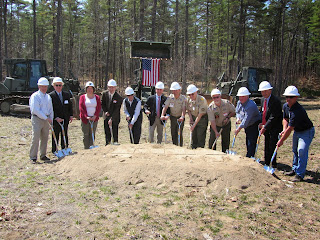 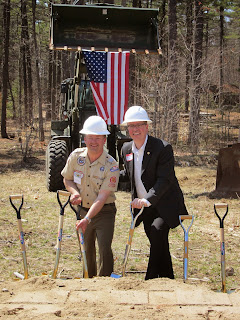 Posted by Michelle Libby at 9:04 PM No comments:

"This gift together with 100 percent of our board participation will enable the PTC to take advantage of a 'once in a century' opportunity of working with the Pentagon's IRT program to improve our camps to some of the best in the country! We are extremely proud of our relationship with the military men and women who serve our country," said campaign co-chair Horace Horton.

STEM, or Science, Technology, Engineering, and Math, is part of an initiative the Boy Scouts of America has taken on to encourage the natural curiosity of youth members and their sense of wonder about these fields through existing programs. Fostering STEM education has emerged as one of Scouting’s and our nation’s top priorities for youth. The BSA launched Project STEM in 2011 as a way of helping youth develop skills that will be critically needed in order to succeed in the competitive world market.

The Nova and Supernova Awards focus STEM activities and provide additional motivation for Scouts to participate in STEM-related activities. By working with an adult counselor or mentor, the various modules allow them to explore the basic principles of STEM and discover how fun and fascinating STEM can be. There are four Nova awards for Cub Scouts, Webelos Scouts, Boy Scouts, and Venturers. Each award covers one component of STEM—science, technology, engineering or mathematics.

"Thanks to Bill and Jacky Thornton’s generous gift, we will dramatically increase our capacity to expose Scouts to our dynamic STEM programs for youth of all ages.  Locating the Thornton Family STEM / Nova Center in the daylight level of our new Dining Hall will attract thousands of children from Maine and the Northeast to Camp William Hinds," said Scout Executive/CEO Eric Tarbox.

Posted by Michelle Libby at 8:48 PM No comments: