RSU14 is seeing a lot of changes to its top administrative positions now that the school year is over. Charlie Haddock is retiring from Windham Middle School where he has taught and worked at least 20 years as a teacher, assistant principal and then principal.


“I admired his ambitious agenda,” said superintendent Sandy Prince. “He’s intelligent. When I watch him with people he’s so respectful.” Other words to describe Haddock were patient, trustworthy and fair.
Haddock’s legacy for WMS will be his attempts to create a children-centered approach to get children excited about what they are learning, Prince said. A lot of that work has been done in the past two years, while Haddock was at the helm of WMS.

“We had unbelievable candidates,” said Prince. Many of the applicants said that Windham was the only place they were applying, which speaks to the reputation of the school department.

“Cindy is a great listener. She has a steadiness about her. She leads by collaboration and wants people to have input,” said Prince. She was described as strategic. She thinks and plans before she jumps into a project. She also used a lot of data to help with her projects.

“She sees the possibility in things,” Prince said.

Kristal Vargo-Ward will join the Manchester team as the assistant principal.

Special education director Dr. Phil Posiatiano is leaving the RSU to take on the role of assistant superintendent at RSU21 in Kennebunkport. His replacement is Lisa Garneau from the Pittsfield area and came highly regarded, according to Prince. This was the hardest position to fill and the second most difficult job in the RSU, said Prince, but he added that it’s “very rewarding, too.”

Posted by Michelle Libby at 7:17 PM No comments: 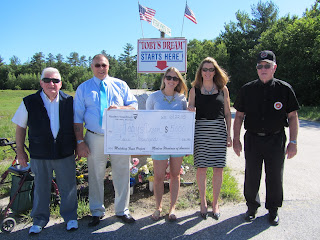 Windham Veterans Association received an additional $2,500 toward the Toby’s Dream campaign this past week when Modern Woodmen matched $2,500 of the money the Veterans raised with $2,500 for a total of $5,000 toward the project.

To date WVA has raised over $54,000 toward the paving of the parking lot at the Windham Veterans Center. Twenty names will be considered “grand donors” having donated $1,000 or more. 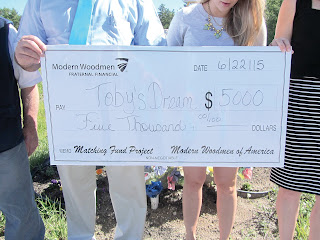 Any additional money WVA raises will go toward other improvements in the property. The paving is planned for this summer, but details are still being worked out, according to Brenda Pennels.

“WVA appreciates all the support for the project from the Pennels family, Veterans and the community,” said Don Swander, the project director for and creator of the Toby’s Dream project. WVA hopes to complete the paving this summer.

Posted by Michelle Libby at 7:10 PM No comments:


Saturday a little over 50 people attended the Town of Windham Annual Meeting at the town hall gym to approve the municipal budget. Gary Plummer acted as moderator for the meeting. He asked for a moment of silence for Windham residents who have passed, those not able to be at the meeting and for Veterans who are serving our country. 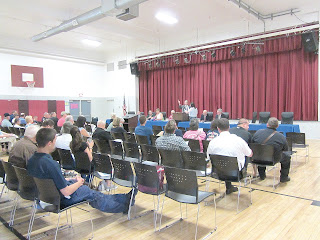 Council members in attendance were Dave Nadeau (chair), Donna Chapman, Tommy Gleason, Bob Muir. Roy Moore couldn’t be there because of a previous commitment it was announced.
The citizens in attendance voted to approve the budget for fiscal year 2015-2016 for the amount of $15,579,836.00.
“We looked at essential services first,” said council chairman Nadeau. “We took that approach for transparency purposes.”
The only issue discussed was the lack of public participation. “We’re approving a multi-million dollar budget. Sixty people are voting on something that affects everyone in the town,” said Carol Waig. She was told that if anyone could come up with a better way to do the annual meeting to speak with Linda Morrell, the town clerk. It would be a two year process to change. 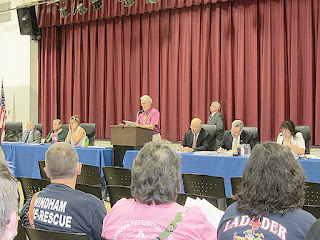 Almost as soon as the annual meeting ended, a special town meeting was called to order to approve the purchase of property for a new South Windham fire station.

“This kind of fell in our lap,” said Nadeau. It was third on the list for improvements behind public works. The opportunity to purchase the buildings in South Windham was too good to pass up. The council was negotiating until late Tuesday night for the purchase and sale agreement. “We’ve been extremely frugal with this,” said Nadeau.

The 12,000 square foot building is part of a commercial condominium meaning that Windham would own the buildings and some land around the structures, but no the entrances and common areas. “The town would own an interest in the land,” said town manager Tony Plante. 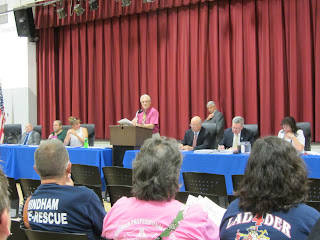 The discussion centered around having another empty building left in the South Windham village, and at the time of the meeting no decisions had been made as to what would happen to the existing fire station on the banks of the Presumpscot River. Plante noted the need for green space and other needs for South Windham. He also said they would have a year to figure that out.

Another resident was concerned with how Gorham felt about moving the station further away from the line. “There is no other site in the village to keep (the fire station) in the village,” said Plante. 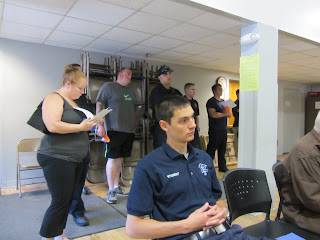 When it came to the vote, it wasn’t unanimous, but the show of hands vote showed strong support for the project, which has a budget of up to $1,668,000 for repairs and upgrades to the existing structure at 33 Main Street.

“I think it is the best option with the least disruption of services. This keeps it in the village and gives us room to grow,” said Chief Brent Libby. “It will be a great community effort. It’s a department project, but people can be involved in, and invest in it.”

Posted by Michelle Libby at 5:30 PM No comments: 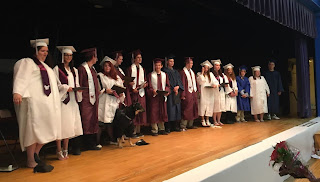 Eighteen REAL School students earned their high school diplomas, representing eight different sending high schools. Thursday evening, June 4, the REAL School celebrated its students' accomplishments with more than 200 family members, community partners, staff, and students in attendance. In keeping with REAL School tradition, each graduate was acknowledged individually by a staff member who knew him or her well, providing sentimental anecdotes and tributes to the students' strengths and highlights from their time at REAL. Every graduate has a transition plan, with eight students enrolled in SMCC courses, three entering trade schools, one entering the military, and six graduates entering the workforce with full-time employment.

RSU14 student, Madeline Wilson, read a letter to the school, including the lines:

"To say that high school has been a struggle for me is an understatement. It has been an uphill battle that, at times, I felt as though I was facing alone ... I felt as though giving up was my only option. (Then) I was welcomed into the REAL School with open arms, I felt included, and for the first time in my hish school career, I felt accepted. Without every single staff member at The REAL School, my goal for graduation would have been unattainable. ...(my teacher) taught me that family is not blood - family are the people who push you, who care for you, even at your most difficult times. Family are the people you sit down and have dinner with at the end of a 13-hour van ride (referring to a recent service learning trip to Washington D.C.)."

An excerpt from another RSU14 student, Emily Denbow:

""Two years passed, and I watched
brilliant, loose sparks catch on fire
We thought we'd failed, until one day
we saw our light dancing

We burned crimson and orange,
Sooty gray and tired black,
Sending flares into the night
to light each other's way

When the flames began to dwindle
fear blossomed and bled from our
lips as we bit down harder, reaching
for anything stronger than us

But one day, we heard a calling
It said, "the road doesn't end here,"
And the fear hardened
Into the skeleton of a phoenix.

With bright, new eyes
We shook the ashes from our feet
at the welcome mat,
and realized we'd been home all along

No longer are we so timid
about the leftover flame inside
I beg you, keep burning -
You know the road doesn't end here."


Posted by Michelle Libby at 3:33 PM No comments:


Last Sunday, the class of 2015 crossed the stage at Cross Insurance Arena in Portland as the 118th graduating class from Windham High School. With dignitaries from the towns of Windham and Raymond, RSU14 school board and legislators, the class expressed their excitement about moving on and their love of the family which lost its son recently.

The guest speaker was US Senator Angus S. King, Jr. He outlined his top 10 list of advice for graduates. He turned around and addressed the graduates instead of facing the audience. 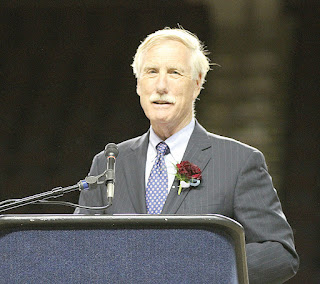 1.  Take more risks (regret the things you did and not the things you did not do).
2.  Learn how to shake hands.
3.  Attitude is everything.  "It's your attitude and not your aptitude that determines your altitude," he said.
4.  There is no such thing as a geographical or material cure.
5.  Always carry a $20 bill hidden somewhere on you.
6.  Be honest.
7.  When in doubt, don't get married.
8.  Don't write anything in cyberspace that you don't want your grandmother to read on the front page of the NY Times.
9.  Treat each job as if it’s the most important you'll ever have.
10.  Value your friends and family because in the end that's all you have. 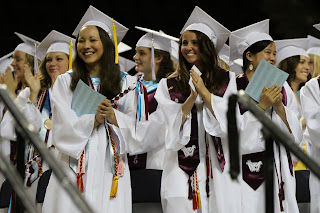 Other speeches by some of the top 10 students had messages like “adventure is out there”, thank you for the love and support of the community, replace I with you and you could be a motivational speaker. 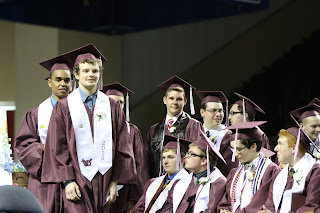 The Senior Chorus sang a song called "Next to Me" written by senior Ceili Spaulding.

The last speech of the night was giving by class president Ian Donnelly, who talked about how his view of life had drastically changed in the last couple of weeks and how the kindness of his fellow classmates, his family and the community at this time affected him. 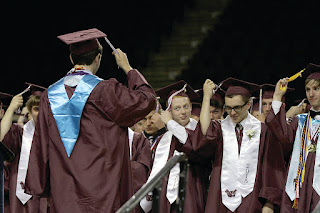 In the program this was printed. “Today’s ceremony is a celebration for all of our graduates. This rite of passage is both a solemn and joyous occasion; it marks the successes and struggles that each student has met while at Windham High School.” 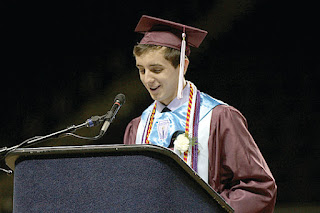 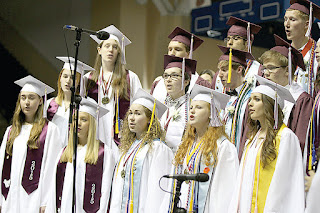 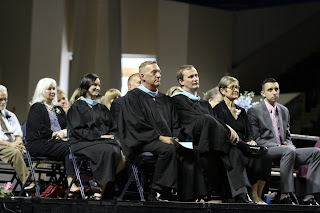 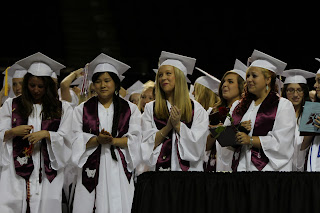 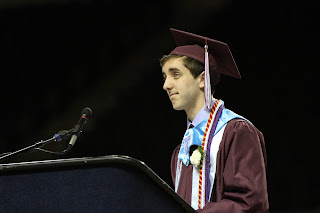 Posted by Michelle Libby at 3:20 PM No comments: