Do you love to watch movies? Are you looking for something to entertain you (or your kids) for a few hours? You might want to attend one of the monthly Movie Time programs at the Windham Public Library, 217 Windham Center Road. They offer movies for a wide range of age groups each month. Although the movie groups are aimed at a certain-aged audience, all ages are welcome to attend. Light refreshments are provided (thanks to our Friends of the Windham Public Library supporters), or you are welcome to bring your own. No reservations necessary, and-- as with all library programs-- attendance is free! Past titles have included “Theory of Everything,” “The Monuments’ Men,” “Out of Africa,” “Big Hero 6,” “Divergent” and “The Apple Dumpling Gang”. 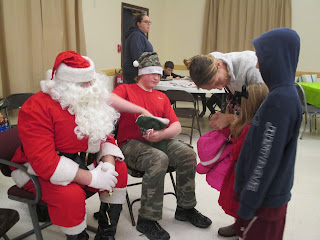 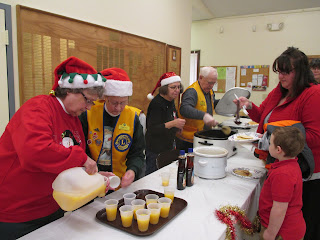 Saturday, more than 400 parents, grandparents and children flooded the Windham Veteran’s Center to eat pancakes and sausages while Santa sat nearby greeting children.


“We do it because the kids enjoy it,” said Lions Club president Gene Tanguay. Breakfast with Santa has been a yearly event for the past 10 to 12 years. “All money donated stays within the community,” he told the crowd.

The Lions Club has been saving for a new $8,000 eye screening machine, which will help make the tests more accurate.

Along with a visit with Santa, children we able to get their faces painted, color or create an ornament with help from the Leo Club, a high school branch of the Lions Club.

Claire Tinker, 4, gets her face painted by Katie Skvorak.

Madisen, 4, and Briggs, 9, Valliere visit with Santa. Madisen wants a baby doll and Briggs asked for an Xbox 1.

Camden Waite, 2, isn’t sure about Santa as he sits with his mom Mallarie Waite.

The John Andrew School in South Windham is slated for demolition, but the Windham Historical Society (WHS) has salvaged many period materials for use in their Village Green living history museum project. 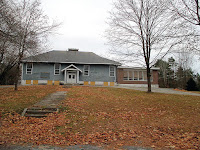 The building, which has been used as storage for RSU 14, has been vacant for many years after the move of the REAL School. Heavy snow storms last winter damaged the building beyond the point of saving it. After the school board voted to demolish the school, the WHS was given the opportunity to get into the property and take what they could. 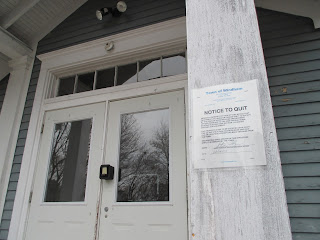 According to Linda Griffin, president of the WHS, members have been busy since the vote, removing varnished woodwork, doors, trim, matched board wainscoting, floor mats, Pine flooring and blackboards with chalk trays, as well as 13 chalkboards.

“The Windham Historical Society is pleased to have some of the architectural items from the John Andrew School to use in future buildings in our Village Green,” said Griffin. Blackboards will go in the one room school house, doors and trim will be used in many buildings, and wainscoting might be used in an ell on the back of the South Windham library, which will be a smaller replica of the railroad depot in South Windham, Griffin said.

Dave Tanguay, vice president of the WHS, said that the society attempts to salvage materials from existing buildings for use in the Village Green any time they can. They need period materials to renovate period buildings, and the ability to salvage some of these materials saves a lot of money. 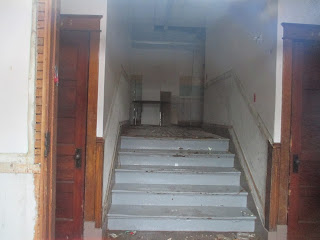 “We bring back some of the past stuff and put it into the contemporary stuff, and it gives a sense of history,” he said. The biggest benefit, he added, is the cost savings. “I can get period wood for free,” he said.

Some salvaged blackboards may be used to create memorabilia of the John Andrew School, which will be sold to benefit the historical society, said Tanguay. Griffin said they also took the doors to the bathroom stalls, which could be painted and sold as souvenirs of the old school.

Tanguay said that the Village Green project is moving slower than he’d like, but they are still making progress. The town wanted infrastructure in place before buildings, he said, so the society has been busy putting in a parking lot and planning for storm water run-off. This spring, he said, the one room schoolhouse will open to the public. 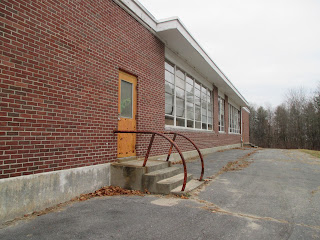 Though it may take several years for the project to be complete, “We are in a better position now,” said Tanguay. Moving forward on some of the projects shows serious intent, and that is one of the criteria for grant writing, which is their next step, he said.
Posted by Michelle Libby at 2:28 PM No comments: