During this season for giving, Windham Middle School has been chosen as the recipient of a grant given by Exxon Mobil. Each year $500 is earmarked to help schools enrich their programs, particularly targeted for science and math. Sue Jones, manager of Mr. Mikes located at 670 Roosevelt Trail was on hand Wednesday to present middle school principal Drew Patin with the check. 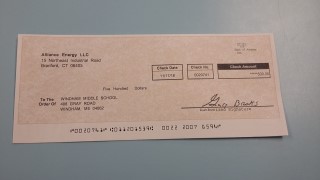 These grants are part of several available to schools across the country served by Exxon or Mobil stations through the ExxonMobil Educational Alliance program. It is designed to provide these retailers an opportunity to invest in the future of their communities through educational grants to neighborhood schools.

With this grant Patin is exercising the option to use the funds elsewhere. “This time it is going toward the after school programs. We want to keep kids busy after school, offering them a variety of activities so there is a niche for everybody and promote the arts and sciences more, also sports and theater which are big here. These things would be more hands on for the kids,” shared Patin.

The process is rather simple.”I nominate schools in my area and Exxon Mobile makes the decision which areas are awarded. If my area is chosen that’s where it begins. They like the schools to target math and science but it can be used anyway they want,” Jones said. This year Jones’ familiarity with the middle school through her granddaughter’s attendance was the reason it was chosen. “We try to hit other schools to mix it up a little bit. We will probably target the high school as a possibility next year,” she continued.
Posted by Michelle Libby at 2:00 AM No comments:


WESTBROOK - Over 45 people braved frigid temperatures on Saturday, December 10, to attend a Presumpscot Regional Land Trust ribbon cutting to officially open a trail system in Mill Brook Preserve in Westbrook. The three-mile trail system is now open to the public for walking, hiking, trail running and snowshoeing. There are three trailheads, the primary trailhead is next to 789 Methodist Road at the top of the new private road, Allen Knight Road.

The story of Mill Brook Preserve, which is owned by the Presumpscot Regional Land Trust, started more than two years ago when the City of Westbrook donated the first parcel of land along Mill Brook to the land trust. With the donation of other parcels since the preserve has now grown to 120 acres.

Mill Brook is about five miles long, beginning in Highland Lake and ending in the Presumpscot River. Most of those five miles, the brook winds through pristine forests all within the City of Westbrook.

“The new trail system will for the first time open the Mill Brook valley for the public to enjoy,” said Rachelle Curran Apse, PRLT executive director. “While the trail system will be open year round, the late spring will be the high season, with the opportunity for the public to watch thousands of migratory fish swimming upstream from the ocean to Highland Lake to spawn. It truly is a spectacular sight.”

City of Westbrook Mayor Mike Sanphy spoke at the ribbon cutting. “The Mill Brook Preserve and trail system is a highly successful collaborative initiative of the City of Westbrook, private landowners and the Presumpscot Regional Land Trust to protect and establish public access to this beautiful and incredibly valuable natural feature in our community,” he said.

“The Presumpscot Regional Land Trust has become an invaluable partner with the City of Westbrook in preserving and enhancing public access to natural open spaces throughout our city,” added former mayor Colleen Hilton at the event.

Toby Jacobs, the Stewardship and Outreach Coordinator for the land trust, stated, “The great news is that this Mill Brook trail opening is only phase one. Thanks to the most recent City of Westbrook donation and another private donation expected this spring, we plan to expand the trail another mile to the north next summer to reach what will be the junction of Methodist Road and Route 302.

Volunteers have been incredible in pitching in to build this trail over the last few months, and they will again be vital in helping to extend the trail next summer.”


PORTLAND - Recently the Portland Water District’s Board of Trustees unanimously approved a combined $42 million water and wastewater operating budget which represents a 3.8 percent increase over 2016.  Much of the increase is related to infrastructure maintenance and improvements, including water main replacement, and wastewater treatment plant and pump station upgrades.

In addition to the operating budget, a $18.7 million capital improvement plan was approved.  The plan allocates $10.8 million in water distribution system upgrades and $6.7 million in wastewater collection system and treatment facility projects.

The budget assumes a mid-year water rate increase of 1.67 percent, which is estimated to add an additional $0.32 to a typical monthly water bill. In coming months, the board will consider a water rate increase.  This does not affect wastewater rates, which are determined by local municipalities.
Posted by Michelle Libby at 2:00 AM No comments:


The Windham Eagle student of the week is Nathan Plummer, a 13-year-old from Jordan-Small Middle School. This eighth grader loves math and social studies. 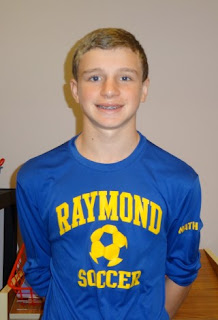 “Nathan’s conscientiousness weaves through all aspects of his life. He is able to balance the rigors of school work alongside the demands of sports, and somehow he manages to have time to be a friend.  He is also a true role model for his peers in terms of work ethic, positive attitude, and being inclusive of others.  He goes out of his way to help his peers, and works well with staff as well,” said his team of teachers.

Teachers who interact well with the kids make learning fun, he said.

Nathan lives with his mom, dad and two brothers. He has a dog named Millie.

Favorite holiday: Christmas
Posted by Michelle Libby at 2:00 AM No comments:


A motion last spring to have a June 2017 referendum for a new Middle School that taxpayers could vote on was recently revisited. On December 7th, RSU 14 board members convened to discuss new developments in that process. To this end, a new motion was made to cancel the referendum 5-2, in lieu of a newly opened up State Board of Education Major Capital School Construction Application Cycle. They agreed to contract with PDT Architects of Portland to prepare and submit the application to the Department of Education by April 14, 2017. This was unanimously approved.


“What happened in the fall, unbeknown to us, was the state opened up applications for new major capital improvements,” explained Windham Middle School principal Drew Patin. So, it is an application we had put in back in 2011. It was a stock application and at the time after the state reviewed them we were number 42 in the queue. Since then there is new structural information that was not available previously and will be added to the new application. Those items may help push things up. State funding that is based off an EPS (Essential Programs and Services) model which is about a 40 percent funding rate leaving the town tax payers with a 60 percent cost,” continued Patin.

The board paused because the possibility of a state funded project would be less of a tax burden on taxpayers. This left the board in a phase of “What do we do next? Do we continue with the referendum or, given this new information, do we have to have a discussion about whether we put in for both applications.”

On this Patin explained, “There are two things that could happen. The problem with the state application is if we were to do both, the application isn’t due until April 2017, so we wouldn’t know until March or April of 2018 whether or not we would be funded. If we continued with the referendum in June as originally planned and that was approved by taxpayers, then the state application would become null and void. Spring of 2018 we’ll make a decision to go to referendum if we are not funded. At that time a June referendum may be too quick so we are probably looking at November.”

Also, if state funding is not granted then two years will have been lost and the project will be re-routed to a referendum. “It’s a difficult decision. I don’t think there was a clear choice with that. Number one, we always need to be concerned what the impact is on taxpayers and people that support the schools. From that standpoint it makes sense to go through the application process if we have the opportunity to be fully funded by the state,” said Patin.

“The other thing that complicated the matter is that we received updated info recently from the state that if we were going to be approved, that given the current legislator and sort of climate we would be approved for 100 percent of the cost of the project. The likelihood of that is what I get concerned about. There’s a chance, but being number 42 on the list and knowing how many other schools there are in Maine that are in disarray, so there’s going to be a lot of applications for aide. I don’t know where we are going to end up,” he said.

“Once the application is submitted it is out of the district’s hands. Principals and other former educators go around as a team to each site, look at the site and then afterward apply the rankings. What I am fearful of is that we don’t make the list and we are pushed back another couple of years for things that need to be addressed now. Certainly I am disappointed, but I understand where people are. This is an expensive project and that it needs to be looked at and looked at carefully. It’s a risk,” Patin said.

“What we are looking at now is we want to make the application as a strong as it can be. That’s what our time is devoted to. We comb through everything and anything that may help us achieve a higher ranking (and make sure it) is included in the application. I look at it as my role and those of the teachers to deliver the best we can for our students, to better their education. All my eggs are in this basket to make sure this application is the best opportunity to bring change to the school in terms of facilities. In the meantime, there are still things that can and will be done such as the renovations at Field Allen, which is ongoing,” concluded Patin.
Posted by Michelle Libby at 2:00 AM No comments: