Once or twice a month, Veteran service officer and advocate Matt Haley has office hours at the Windham Veterans Center behind the Windham Mall to help area Veterans get answers, provide guidance and educate on benefits. Veterans from all over the lakes region drop in to see Haley to answer questions that range from what are my benefits or how to I upgrade my dishonorable discharge?

Fifteen years ago, the Veterans Administration of Maine inquired about bringing a Veteran service office (VSO) to Windham as a satellite office to the main office in Portland. Robin Shepard was the first VSO and there have been others. Haley has been coming to Windham for a year now. He is a state employee, working for the VA of Maine. He is a honorably discharged Army Veteran. He was deployed to Iraq and did public safety. For his job as a VSO, he has also had TRIP training, which is necessary to know how to process claims, legal obligations and HIPPA. Training is an ongoing, internal and informal process, he said. 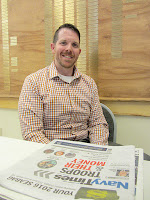 He helps Veterans who were denied benefits and helps them reapply or helps them file or get paperwork. Some people just need to know what their benefits are.

“Most can get glasses and hearing aids, no matter how long they served,” said Veteran Dave Tanguay, who was welcoming people as they arrived. The American Legion Post 148 hosts the monthly visits. “People come from Naples, Otisfield, Standish and Limerick because they don’t want to drive into Portland.”

On an average day that Haley is in Windham he sees between seven and eight people. Last week, he saw 13. “You never know who’s going to walk through the door,” Haley said. When the service first started the lines were out the door, Tanguay said. Every time there are changes in Veterans benefits there are bottlenecks so vets can find out how the changes will affect them.

“I provide closer access to Veterans who can’t get into Portland. It can be very intimidating to drive into Portland,” Haley said.

Starting in February, Haley will be at the Windham Veterans Center from 9 a.m. to 3 p.m. on the second Wednesday of every month. This down from two times a month. Appointments can take five minutes or they can take a hour and a half. It doesn’t matter how long as long, as the work is done, he said.

The most common issues Haley works with are injuries sustained in service, which entitles Veterans to receive help, healthcare paperwork, general medical coverage and prescriptions and survivor benefits. He also can help with requests for discharge updates.

A lot of Veterans in the Vietnam era were dishonorably discharged for some of the choices they made. The practice was to encourage men to drink to release stress. Marijuana and opiates were also used to alleviate boredom and the miserable weather, Haley said. When the soldiers got caught, they were dishonorable discharged. Now the government has changed its stance and many of the discharges are being overturned.

“Every vet and serving spouse deserves equal opportunity to benefits available to them. It’s a convoluted and difficult process. It’s overwhelming,” Haley said. “It’s easy for people to throw up their hands.”

“The rules are always changing,” Haley said. Now the big issue is getting care related to Agent Orange for Vietnam Veterans.

Haley takes statements and helps Veterans remember facts that happened 50 or 60 years ago.

“It’s an interesting job. I love what I do,” he said. Haley can help get a designated spot for Veterans in one of the four VA cemeteries in Maine. He also can provide a color guard and information about death benefits. He helps people find jobs, create a resume, solve car issues and can act as a referral service.

Some Veterans are reluctant to go to the VA for help, but “The VA is there for all of us Veterans regardless of our service and combat. Getting Veterans in the system is important so that someday down the road, if there is an issue, it will be easier to get the paperwork together. Long gaps of time between separation and when the VA is needed, makes the work harder.

“I can help make the difference in someone’s life,” Haley said.

The next date Haley will be in Windham is January 27th. After that it will be the second Wednesday of every month.
Posted by Michelle Libby at 10:43 AM