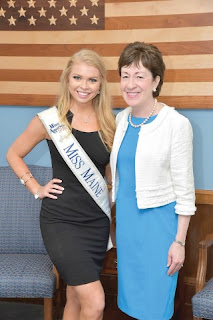 Washington, D.C.—U.S. Senator Susan Collins met with Marybeth Noonan, the winner of the 2016 Miss Maine Pageant, in her office in Washington, D.C. Noonan, a 20-year-old Raymond native, currently attends Lyndon State College in Vermont where she is studying electronic journalism.

“I was delighted to meet with Marybeth and welcome her to our nation’s capital,” said Senator Collins.  “Marybeth worked hard to achieve her dream of winning Miss Maine, and I wish her all the best as she prepares to represent our state in the 2017 Miss America Competition.”

Noonan has been competing in pageants since 2008 and was the first runner-up in the Miss Maine Pageant in 2015.  She will compete in the upcoming Miss America Pageant on September 11, 2016, in Atlantic City, New Jersey.
Posted by Michelle Libby at 2:00 AM