The Windham Eagle student of the week is Nathan Plummer from Jordan-Small Middle School. The soon to be eighth grader loves math and sports. 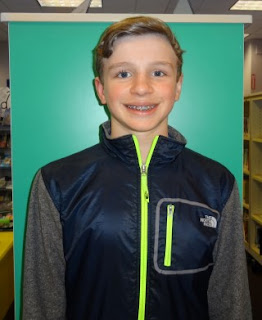 “Nathan Plummer exhibits the most valued traits of a good friend and an excellent student.  Peers describe him as trustworthy, accepting and dependable. He leads by example and is someone who welcomes others' opinions.  He never boasts or brags in order to upstage someone else.  Nathan's strong academic skills shine because he is willing to work hard, has a positive attitude and seeks to understand, not just get things done.  Most importantly, Nathan will help anyone who is in need.  Today's students are tomorrow's leaders and with Nathan Plummer at the helm, the future looks bright,” according to his teachers.

“When I grow up I want to go to college then maybe into the Navy and then find a job in law enforcement,” Nathan said. When  he’s not in school working to get into college, he is practicing sports.

Nathan is the son of Kim and Scott. He has an older brother Ryan and a younger brother Sam, as well as a dog named Molly.

Email ThisBlogThis!Share to TwitterShare to FacebookShare to Pinterest
Labels: 2016, JSMS, raymond, RSU14, student of the week, The Windham Eagle, Windham