Student of the week - Anna Ouellette


he Windham Eagle student of the week is Anna Ouellette, a third grader in Mrs. Mansir’s class. Anna is eight years old and attends Windham Primary School, where her favorite subject is math.
“Since the first day of school, Anna has been kind and caring to all her classmates and teachers. She is polite, focused, and always ready to help!” said Mrs. Mansir. 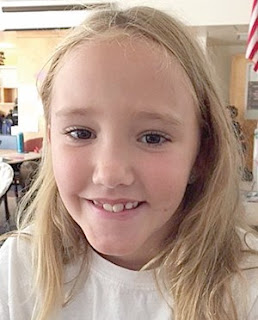 Her greatest accomplishment to date is helping out at the Animal Refuge League.

Anna’s mom has been there for her through her education. As a former teacher, she is the best motivator. Learning is fun and she enjoys it, she said. In her free time, she enjoys soccer, playing with her cats and doing gymnastics.

Anna is the daughter of Eileen and Jake Ouellette. Her pets are cats named Lily, Cookie and Simba. She has two fish, Sharkie and Mary and a guinea pig named Kelly. 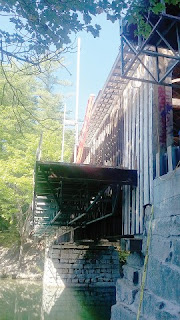 Thanks to State funding, the oldest of less than a dozen remaining covered bridges in Maine, is once again being repaired. Over the years the 173-year-old iconic Babb’s Bridge has endured the elements, rose from the ashes of arson, survived a misdirected snow plow and most recently suffered damage from vandalism. Work began immediately on September 19th with a MDOT establishing and setting up detour routes. The following two days involved the assembly and placement of staging platforms to be spanned across the Presumpscot River to aid construction workers as they make the repairs. 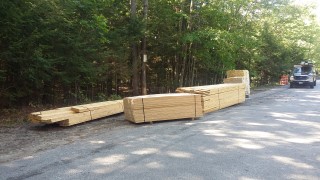 “The repairs will involve roof and gable ends that need to be replaced along with side boards that were damaged by vandals. Doten Construction, Inc. of Freeport will be doing all the work.  The Price tag for the project amounts to $89,000,” said DOT spokesman Ted Talbot. The rather large amount is a result of vandalism being added into the equation. 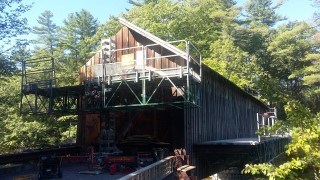 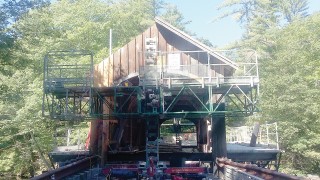 “The entire roof is being removed down to the bare rafters. A layer of sheathing will cover the boards which are the structural part that hold the rafters and the bridges covering together. Another layer will be added on top of that and cedar shakes on top of that. The excessive sheathing is what will prevent vandals from poking holes in the roof to gain access,” stated a Doten worker.

With nearly everything they need to complete their mission on site, one worker estimates, “there is an outside chance, depending on unforeseen circumstance, of the project being completed ahead of schedule.” While the work is ongoing the bridge is closed. The access road will remain open to local traffic on both ends.

Posted by Michelle Libby at 9:47 AM No comments: 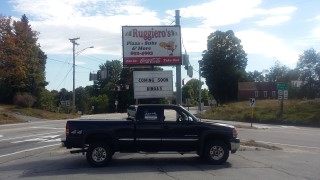 With two locations, one in Portland and another in Yarmouth there will now be a third Bingas Wingas right in South Windham. With the recent exit of Ruggiero’s at 106 Main Street in Windham, owner of the property Michael Harris decided that this would be an ideal place for his restaurant.

“We had looked for another location in other cities and towns and Windham was definitely another one we wanted to come to. We looked in North Windham at some of the bigger locations but you get more of that neighborhood feel around here. We felt it was more corporate and franchised and that’s not what we wanted, again there is the neighborhood feel we wanted,” Harris said.

“I’ve owned the building for 17 years. I had two tenants prior for the first seven or eight years that did really well; the last two, not so much. It got to the point where I had to boot them out. Since I didn’t want to go through that again I decided to open Bingas in a new location. People in the neighborhood had been asking for it so we decided to just do it”, explained Harris.

Much smaller than the other two locations, Windham’s will have only 24 seats because of parking

requirements as set forth by the town.

“The size is small so it will take time for people to get used to the size of 24 seats,” said Harris. “This is really more of an express or takeout location. There may end up being difficulty in finding a place to park but you can call ahead. There will be designated parking for pickup so you can just come and go. Other than that, this location will offer the same environment with a bar, dartboard, etcetera,” continued Harris.

Doors will open in approximately 60 to 90 days. “This is because the building is being totally gutted right down to the framing. Everything is going to be brand new. I like to start fresh,” Harris said. He also expresses that there should be no concern about the quality of the wings they are famous for or any other menu item.

“I am bringing in the kitchen manager from another location so the food will be same as what people are used to from the other locations,” he said, mentioning that he is hiring local residents.


Windham Fire Department welcomed a new member this past week, a 2016 Pierce Pumper truck that holds 1,000 gallons of water, 30 gallons of foam and has seating for five firefighters.

The new truck will replace a 1994 truck that will become a spare, reserve truck, replacing a 1981 truck. Fire trucks have an average life span between 20 and 25 years, according to fire chief Brent Libby. 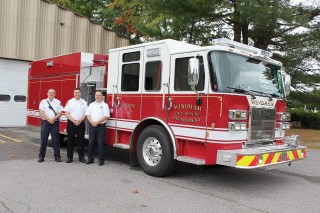 The new truck is made of aluminum with a galvanized frame instead of steel. This alleviates the problem of rust, giving the rig longer life if maintained properly. The truck has many new safety features to make it safe for the firefighters.

“There has been more awareness around cancer and firefighters,” said Libby. Everything firefighters are exposed to is potentially dangerous from burning buildings and ash to chemicals given off at fires. The new truck as a “clean cab”, which means that there is a storage location out of the cab for the air packs and gear to be stored, so that when firefighters are done at a scene they are getting into the cab the cleanest they can be after fighting a fire. In the older trucks the gear is taken right into the cab with them. “This will help reduce that exposure,” Libby added.

“Incidents (of cancer) in firefighters are very high.”

Other new technology is the upgraded LED lights that can illuminate a site in the dark of night. Ladders are stored inside the keep them out of the weather. The heating and air conditioning systems are improved and the insulation is superior making the noise inside the cab noticeable different. Medical equipment is now kept in the cab very accessible. 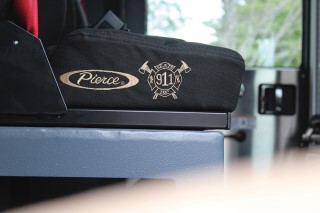 The truck will be housed at the North Windham Fire Station to respond to fires, alarms and car crashes. It will take one month to get everyone trained on the truck and will go into service near the end of October. The rig will be at Public Safety Day on October 1 at the public safety building on Route 202.

Posted by Michelle Libby at 9:37 AM No comments:

AARP Maine will be offering free document shredding to help protect your identity and a seminar on scam awareness - especially scams directed toward the elderly.

The Windham Police Department will have K9 demonstrations, provide tours of the Public Safety Building and take-back prescription drugs for proper disposal.

Windham's Fire/Rescue Department will be on hand to give tours, have a touch-a-truck event, and make people aware of the dangers of carbon monoxide poisoning.

Windham's Legislative delegation—Sen. Diamond, Rep. Bryant, and Rep. Corey—will be on hand to explain and answer questions about new Maine laws pertaining to safety and other issues.

Windham Safety Day will be fun and informative offering something for people of all ages. Light refreshments will be available.
Posted by Michelle Libby at 2:00 AM No comments:


Three days ago Windham Town Council met for the purpose of examining the current issue surrounding the use of consumer fireworks. This has been a sore spot for numerous residents since the legalization went into effect in 2012. During the session a petition for action containing over 100 signatures was presented to council members.  Residents cited examples of the noise by explaining, “The explosions are so loud is like being in Afghanistan. Clearly these particular fireworks are commercial rather than consumer grade.” 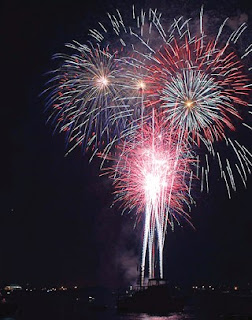 The issue of damage from fireworks was presented by residents who stated they live on Sebago Lake. “I have had scorch marks on my boat cover and other property damage.”

“Noise from fireworks is one thing, but when damage occurs this is more disconcerting,” said town manager Tony Plante.

Additional testimony by residents who spoke publicly was enough to convince members that something needed to be done. The point of enforcing the current law was also presented.

“The majority of our calls complaining about the noise created by fireworks have been received prior to 10 p.m, making it impossible to respond because the current law allows usage up to that time,” said Windham Police chief Kevin Schofield.

It was unanimously agreed that something needs to be done and at the next meeting on October 4th steps will be taken to put something in place and voted on at the October 25th meeting.

The public is always invited to attend these meetings and videos can be viewed at www.windhammaine.us
Posted by Michelle Libby at 2:00 AM No comments: