Valedictorian-- Brandon Berry of Naples has attended Windham Christian Academy (WCA) since Pre-Kindergarten in 2003. He is very active within his church, Windham Assembly of God.  He volunteers on the church’s music team, serves as worship leader in weekly school chapels, and performs music at several area church youth groups. 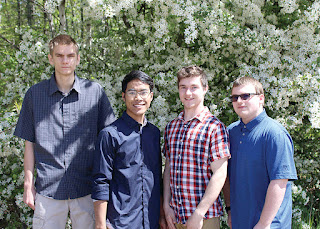 Berry played on the Varsity team throughout high school and was Co-Captain of the Varsity Soccer Team this year.
Berry has been selected to the Assembly of God’s National Fine Arts Festival four years in a row. He will compete in several categories this summer at the National Youth Convention in California.
Berry is recognized as an Association of Christian Schools’ International Distinguished Christian High School Student for Academics, Athletics, Christian Service, and Fine Arts.

Berry is planning to take a gap year to finish the miniseries he began earlier this year as part of his Senior Project. He will continue his song writing, photography and music production after graduation.

Salutatorian – Noah Seavey of Standish began his educational career at WCA as a Kindergartener in 2004. He played Varsity Soccer all four years of high school, served as Co-Captain and was named Most Valuable Player during his senior year.

He planned, supervised, and led the Seavey Soccer Camp this spring. Since Elementary school Seavey has volunteered as the sound technician for many school performances and events.
Seavey served on the Student Council. He earned the rank of Sargent with the Cumberland County Sheriff Explorers. He built two rowboats using the skills learned in Wood Working Class.

Noah has participated in two Church Building projects in Kentucky and has been very active in his church’s youth group events, serving as a teen leader throughout the years. Seavey will be attending the University of Southern Maine for Mechanical Engineering.

Sam Kramschuster-- of Gray joined the WCA student body in 2012 as an eighth-grader. Kramschuster enjoys video games, reading and plastic model building. He has had a long career as a neighborhood dog walker of which he enjoys tremendously. His interest in mixed martial arts, Airsoft, throwing knives, and historical weapons combined to inspire Kramschuster to create a Japanese Samurai’s Kanabo that was well over 4 feet tall for his Senior Project.
His advice to younger students, “Enjoy your time in high school.”
Kramschuster is considering a career in the military after graduation.

Seth Strout-- of Bridgton came to WCA in sixth grade.  He participated on both JV and Varsity Soccer teams and assisted as a Sound Tech during chapels. Strout enjoys working on cars, computers, and technology in general. Hands on Science classes and Math were his favorites here at WCA. In his free time, Strout is working to restore a vintage Chevrolet Camaro.

Strout would like to tell the younger students, “Keep going and don’t give up, no matter how hard it gets. To the teachers, thank you very much for guiding me.”

Strout’s passion for technology fuels his desire to know more and motivated him to build a gaming computer for his Senior Project.  He has plans to begin his own computer business after graduation.