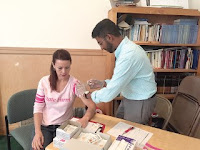 
Pictured here is Tricia Zwirner of Windham receiving her flu shot given by pharmacist, Sanchu Thomas of the Windham location. Posters of the timeline and number of Polio cases from 1988 through to today, it's progress throughout the years and the impact that Rotary has made toward the eradication of the disease were also available for folks to look at. Handouts were also shared which included the link to rotary's website for donating to the Polio effort. Avery Farthing, of Raymond, painted purple pinkies as an effort to further Polio Plus awareness.

Posted by The Windham Eagle at 7:22 AM No comments:

The waitstaff and owners of Rustler’s Steakhouse are teaming up to raise funds for the Nolan Desmond Family who are facing significant medical challenges. The “Tips for a Cause” fundraising event will occur this Sunday, October 29 from 11 a.m. to 4 p.m. at the restaurant located at 754 Roosevelt Trail.

According to a previous article written in the October 7, 2016 edition of The Windham Eagle, Nolan received chemotherapy along with laser treatments on newly formed tumors and the treatments shrunk the tumors to half their original size. “All tips will be donated to the Nolan Desmond Family,” stated Hayley Moon, owner of Rustler’s. “And the owners will match the total amount.”

If you cannot make the event you can donate anytime to www.gofundme.com/babynoles/donate.
Posted by The Windham Eagle at 7:18 AM No comments: It was announced by the Town Manager’s office that the TV-7 WireCast system has been updated to include the ability to provide video and audio feed directly to Facebook Live. A test of this update will be performed at next Tuesday’s meeting as well as Thursday night’s Speak Out with Bill Diamond.

The Council discussed and adopted the policy on tax increment financing districts and credit enhancement agreements, establishing criteria and procedures.

The Windham Parks and Recreation Ad Hoc Committee Members, Pat Moody, Beth Schidzig and Cathy Streifel as well as Parks and Rec Director Linda Brooks reported to the council the preliminary planning phase for the development of a community center for the town of Windham, presented their findings and recommendations.

The report included the preliminary needs of a community center space to include, but not limited to study space, performing arts center, gymnasium, teen/youth hangout as well as adult/senior lounge to name just a few.

Also reported to the Council was the vision, mission and purpose of a community center, with the goal to shift from a “livable to a lovable” community. Potential funding sources and projected goals were also discussed with the Council.

One public comment for this development of a community center was presented by Laura Morris, Director of Be The Influence. She reiterated the importance of having a center to keep students off the streets after school and thus preventing alcohol and drug use.

The report as given to the Council was supported and the Ad Hoc Committee Members were thanked for their hard work.

The Council also heard a series of suggestions for amendments in various ordinances relating to water quality protection in the Highland Lake watershed from the Planning Director Ben Smith, Town Engineer John Earl and Director of Code Enforcement Chris Hanson.

The discussion was on the following changes to ordinances that may allow the Council to lift the current moratorium on certain development activities in the watershed. The suggestions for areas of amendments as stated in the cover letter to the Council included:

For single family homes, implement a “point system” for various storm water control measures to ensure higher levels of treatment than currently exist.  An advantage to this approach is potentially saving the need for every project in the watershed to be engineered for storm water/phosphorous control.

In the Land Use Ordinance:

Require all local subdivision/site plan projects to design to the DEP phosphorous TMDL requirements even if the DEP regulations allow applicants to pay a fee in lieu of meeting the standard.

Require new private roads in the watershed to be designed to treat storm water.
Public comments were also heard regarding this issue, both for and against. The meeting was adjourned at 10:15 p.m.

FMI on this and previous council meetings, go to the Town of Windham website at www.windhammaine.us <

Posted by The Windham Eagle at 7:09 AM No comments:

Posted by The Windham Eagle at 7:04 AM No comments:


A Veterans Day Program and Open House, hosted by Windham Veterans of Foreign Wars Post 10643, will be held at Windham Veterans Center on Saturday, November 11 at 11 a.m. The public is invited to attend this program and refreshments will be provided.


Mr. Lee Humiston, founder, director and curator of Maine Military Museum will be our keynote speaker. Patriotic songs will be performed by the Windham Chamber Singers and Boy Scout Troop 805 will be in attendance assisting with the day’s events.

The winners of this year’s VFW sponsored essay competitions will be introduced and the winners will read their essays.

The theme for this year’s Patriots Pen, grades 6-8, is “Americas Gift to my Generation” and the voice of Democracy theme, grades 9-12, is “American History: Our Hope for the future.”

Posted by The Windham Eagle at 6:57 AM No comments: