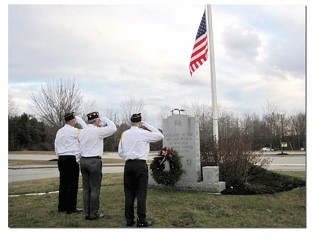 American Legion Field-Allen Post 148 Honor Guard Members, Larry DeHof, Dick Graves and Dave Horne, along with a small contingent of local veterans, placed a wreath at the Town’s Veterans Memorial in front of the High School, at a ceremony on Thursday, December 7 in remembrance of Pearl Harbor.

The following script was read: “On December 7th, 1941 more than 2390 Americans lost their lives when Japanese bombers launched a surprise attack at Pearl Harbor. We place this wreath today to honor those Americans who gave their lives on this date to preserve our way of life in a free world.

This is the 15th consecutive year that the legion has placed the wreath on the Memorial. Earlier, the Post Honor Guard placed wreaths on the Veteran Memorial and Vietnam Memorial located at the Veterans Memorial Garden in North Windham.

Posted by The Windham Eagle at 6:47 AM