Plan B for the ‘unlucky’ child – A free lecture by Dr. Ross Greene by Lorraine Glowczak

The Windham PTA along with the G.E.A.R Parent Network hosted a free lecture by Dr. Ross Greene, an internationally renowned child psychologist and creator of the Collaborative & Proactive Solutions (CPS) model of care. The presentation was held on Monday evening, April 2 at Windham High School’s Performing Arts Center. Over 220 parents, caregivers, youth and educators of children with behavioral and mental health needs were present to gain a better understanding of Greene’s approach.

Greene was on the faculty at Harvard Medical School for over 20 years and is now the founding director of the non-profit Lives in the Balance, based in Portland, which provides free, web-based resources on the CPS model. He has appeared in a wide range of media, including The Oprah Show, Good Morning America, The Morning Show, National Public Radio and the Boston Globe to name a few and is the author of “The Explosive Child”, “Lost at School”, “Lost & Found” and “Raising Human Beings”.

The 1½ hour lecture followed by a fifteen-minute question and answer session came with no PowerPoint presentation or bells and whistles of any kind. It was a laid back and yet captivating discussion regarding the CPS approach and how it improves the way children with behavioral challenges can be better understood and treated as well as how to solve problems while teaching valuable life skills, and how to improve parent-child communication gaps and brainstorm solutions.

Greene began his talk by clarifying what it meant to be labeled with behavioral challenges. “Challenging behavior is just the signal that the kid is communicating, ‘I’m stuck.’ If we need to have categories, there are just two – lucky and unlucky.”

He went on to explain the difference between the lucky and unlucky child. The lucky child is one who can communicate his/her needs with words. If that doesn’t work, then the lucky child will sulk, withdrawal, cry or whine. “Why is this child lucky,” began Greene. “Because these behaviors will not get you expelled, put into detention, suspended, hit, locked up in a padded room or pinned to the ground. They will elicit sympathy and understanding.” 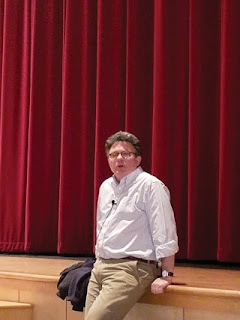 Greene, however, did not start out his career approaching unlucky children with the CPS method.  “When I began in my role as a staff member on an inpatient psychiatric unit in 1978, I was trained to restrain kids,” recalled Greene. “I was instructed to whisper into his ear, ‘If you don’t calm down you will get a shot.’ That threat never calmed them down. They always got the shot.

“The idea came to me that how I was trained to react was not working,” explained Greene in a phone interview. “I began to ask myself if there was a way to do things differently.”

This self-reflective question got the ball rolling towards the concept of the CPS model. Although it took many years to reach the final CPS model of care, Greene credits his study during graduate school of Walter Mischel, a psychologist who wrote extensively about frustration tolerance and delay of gratification. During his development of the CPS model, Greene also relied on research showing that behaviorally challenging kids lack the skills to handle frustration adaptively, solve problems and be flexible.

“The lecture was very well received, and many parents feel they have a few more tools in their tool belts to better care for their ‘unlucky’ kiddo,” stated Amander Wotten, PTA President.

One such parent was Anne Schink of South Portland. “Without a doubt, he was excellent, offering practical information” stated Schink. Schink’s oldest daughter who is now an adult living on her own would have been classified “unlucky” in terms of communicating her needs.

Schink stated her daughter was not given a label. “Autism wasn’t a word back then,” Schink began. “She had characteristics of that label. She had a smart brain, but all the pieces didn’t fit. Like Dr. Greene said, she was unable to communicate her needs. For example, when we went to the grocery store, I eventually discovered there was too much stimulation for her (the lights, the sounds, etc.) and she would have a meltdown. After doing my own research, I realized she was trying to tell me something and I figured out the overstimulation piece. I stopped taking her with me. If she had the ability to express herself, she would have.”

Many educators came away with additional tools to use in the classroom and some currently use Greene’s CPS model of care. “In my current classroom I have used the CPS model in a couple of situations that have proved successful,” stated Robin Mullins, a substitute teacher at RSU14. “Many times, when you actually sit and listen to a child you discover what you thought was an issue really is not. The important thing to remember when using this model is to be empathetic to the child's concern. What might seem trivial to an adult might be the world to an 8-year old.”

Dr. Greene lectures and consults widely throughout the world and lives in Portland, Maine.
For more information about the CPS model, go to the Lives in the Balance website at www.livesinthebalance.org.
Posted by The Windham Eagle at 5:31 AM