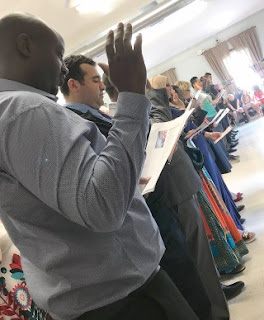 The citizens had to go through classes and rigorous screenings to make it to that day. The introduction was given by Kim Colson-Hoffman, Immigration Services Officer and Army veteran.
“Many of you fled hardship and sacrifice. Each of you chose to make America your adopted home,” she told the audience.

American Legion Post 148 Color Guard presented the colors and led the “National Anthem,” which was sung by the Windham Third Grade Chorus, under the direction of American Legion Auxiliary member and music teacher Nancy Cash-Cobb. The chorus also sang “I’m an American” by Rick Charette and “Everyday Heroes” by Dave Carroll.

“It’s a privilege and an honor for me,” said Wade Campbell from Jamaica. “I’ve lived here for the past couple of years.”

Most of the citizens brought family members and friends to help mark the day. Egide Mucowingabo, a military veteran, brought his friend to record the entire ceremony.

Welcoming remarks were given by Rebecca Cummings, an Army Veteran, a member of the American Legion Post 148 and a Windham Town Councilor. She began with greeting people in their native languages. “I am so excited that this weekend, when we’re remembering soldiers of the past, that we’re welcoming new citizens.”  Cummings’s biggest message to the new citizens was to not lose who they are and what they want to become. “Anything you wish to achieve is achievable. We welcome you to this country and wish you all the best,” she added.

The day was extra special for Cummings, as one of the families from the East End Community School where she is a nurse was naturalized.

“It’s nice for them to see me outside the school. They see American’s wear many hats,” she said.
Megan Nelson, Supervisory Immigration Services Officer administered the Oath of Allegiance, before Representative Mark Bryant spoke.

“The foundation of our country is not built on the towering figure of history,” he said. “Hope for change is made possible by one person, courageous enough to stand for country, community and family.”

The most important part of the day for Henrietta Schmalzel from Hungary was: “To be united with the family. To be free. To enjoy the great opportunity,” she said. Her husband and son are both Americans and it was important to her to be able to say she’s American as well. “This is my home now. I’m excited.”

Windham Christian Academy student Briana Johnson read her award-winning essay “America: Our hope for the future” followed by James Mannette, a Windham High graduate who will be leaving for the Air Force Academy in June, read his award-winning essay “My vision for America.” “Veterans are some of our most heroic citizens,” he said.

The Third Grade Chorus led the first recitation of the Pledge of Allegiance before the citizens were dismissed.

The ceremony meant a lot to Josue Parra, who came to America from Ecuador in 1999. “It’s everyone’s dream to become a citizen,” he said.

At the end of the ceremony, The League of Women Voters registered the new citizens to vote.