It is mandated by the State of Maine that each municipality employ an animal control officer (ACO) to investigate mistreated animals and control those that are deemed dangerous, abandoned or lost. For smaller communities, an ACO is often employed by more than one town.

This is the case for Jessica Jackson, the Animal Control Officer who provides the required state services for the towns of Raymond, Casco and Naples. 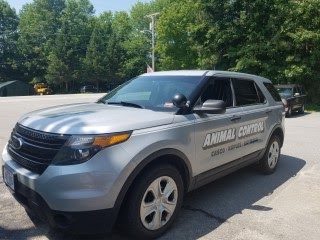 Jackson has been the area’s ACO since 2011. She has performed her job and responded to calls, concerns and complaints by using her own vehicle in the 125 square miles that comprise the three communities. Until recently, that is.

Through the collaborative efforts of the three towns, a 2014 Ford Explorer Interceptor was purchased from Maine State Surplus Property. “This newly acquired used vehicle was previously utilized by the Maine State Police and came with extensive interior improvements to safely transport a police dog already installed,” explained Don Willard, Raymond Town Manager. “The vehicle has two separate climate-controlled cage areas, a second and third row aluminum interior liner and features a remotely actuated electric-hydraulic rear passenger side entry door. We [the three towns] were able to pool our resources together to purchase this vehicle all equipped, at the reasonable cost of $3,000 per town.”

Once the Ford Explorer made its way to the Lakes Region, it received a new look with graphic lettering on the side doors and rear hatch establishing it as an Animal Control vehicle representing the Towns of Casco, Naples and Raymond.

Jackson states that the new vehicle delivers not only a safety factor but imparts a distinct visibility as to what she is doing in the area and why she is present. “With the marked vehicle, I am more visible to the community and it acts as a deterrent for the mistreatment of animals,” she said. “It also offers more security for me as an officer because people can clearly identify me. From a safety standpoint, people know the purpose of my being in the location. People are now approaching me because they know who I am and who I represent. This was not the case when I was driving my own personal vehicle.”

Jackson is on call 24 hours a day, seven days a week and the company supplied vehicle adds a little relief for the demanding travel of the job. “It was a natural progression from Jessica using her own vehicle to one that is provided for her,” Willard said. “All three towns appreciate Jessica’s expertise and dedication and we want to make the job more accommodating for her in terms of travel and safety. We are examining ways to establish a more reasonable schedule, as well.”

Jackson encourages people to contact her with any concerns regarding domesticated animals. “I want people to feel comfortable asking me questions and sharing anything that may concern them regarding domestic animals,” she stated. “I’d rather have a concern go unfounded than unreported. Also, I prefer to be proactive rather than reactive. Most often, with a little communication and education, many issues can be resolved if you catch them in the early stages.”

Jackson, who is also a licensed wildlife rehabilitator specializing in wildlife predators, urges everyone to keep a watchful eye on their animals, report them missing promptly, and attach ID tags along with registration tags. If they do go missing, please report it promptly.

To report missing, abused or abandoned animals, Jackson can be contacted by calling the Cumberland County Dispatch Center at 800-501-1111.