Raymond, Windham and other Cumberland County citizens and business owners have an opportunity to provide information by participating in surveys to express their opinion with current internet offerings and future broadband needs. Why is there a need for these surveys and why is it important to take few minutes to answer questions regarding broadband and internet access? 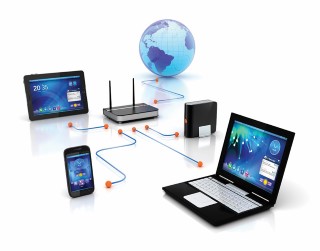 In the August 24, 2018 edition of The Windham Eagle, it was explained in this way:
“It was only about 20 years ago when the popular use of dial-up internet hit the mainstream, changing the way the world communicates and completes business. Blast forward to the 21st century where high-speed internet has changed life further, affording many the freedom to create home-based businesses, provide financial savings via online learning as well as the ability to ‘cut the cord’ from cable television.

But much like a well-traveled road that requires expansion to continue the swift pace desired, the speed and availability of the internet is quickly changing. For those in rural areas like Windham and Raymond, the internet is unable to keep up with the traffic and demands of its residents, students and business owners.”

And some say that road is owned by only one company, thus monopolizing costs. It has also been said that the company can determine what information can travel and be accessed on that road. The truth of the matter must be determined by the individual and thus the reason for the surveys.

But there is some truth that the slowing internet access can pose a problem for those who need to respond quickly in order to compete successfully as a business.

At the present time, Raymond citizens and business owners have two survey opportunities. One is a public information survey made available by Cumberland County and the other is produced by the private company, GWI, which is supported by the Town of Raymond and can be found on the town’s website (Links to both surveys below).

Kerem Durdag, Chief Operating Officer, of GWI stated that the purpose of the GWI survey is to determine the various service level and affordability options and to investigate methods of providing the needed services based upon the result of the responses. “We are applying for a very competitive federal loan to provide an option of fiber optic based broadband and high-speed internet services to rural communities in Maine. As a condition of the application, a survey must accompany the process,” Durdag explained. “GWI is taking the entire financial risk if the federal loan is awarded so that municipalities don’t have to and can move forward, no matter the outcome of the federal application process.”

Durdag also stated that the GWI survey is designed to take only 60 seconds of an individual’s time.
Travis Kennedy, Director of Public Affairs for Cumberland County stated in a recent email to municipal partners, “The purpose of the [public] survey is to study broadband in the region and identify means to expand or improve access at regional levels in communities that end up deciding they want to pursue it. We earned a Federal grant last year to hire a contractor who we're working with on this project. A big first step in this process is surveying community need and desire; and the business community is paramount to that data gathering, because economic development is so much at the core of the need for stronger Internet access. It's also one of the key questions that municipal leaders ask, because they like to see evidence whenever a public investment might result in a stronger economic base.

Tom Bartell, Executive Director of Windham Economic Development Corporation encourages Raymond residents to take both surveys and Windham residents to participate in the Cumberland County survey. He indicated that both are trustworthy surveys and adhere to the mission of improved internet service. “GWI and Cumberland County surveys are both reliable surveys and will do what they say they are doing, which is to determine the wants and needs of the community” he said.
Bartell also stated that there will be other internet surveys that may come out soon, but he warns
they may have an ulterior motive, such as to get you to purchase their product, of which Cumberland County and GWI do not have.

“We're agnostic about method here; we're not trying to sell anything. It may be that we'll learn in some communities, this isn't viewed as an issue and those towns can move on to other concerns. Ultimately, our goal is to get the information and then help develop concrete plans to respond to it,” stated Kennedy. Durdag concurred with Kennedy in response to the GWI survey and added that the details of the respondents who fill out the surveys are protected by its very strict privacy policies.

The links to the surveys are as follows: