On Saturday, May 11, 2019 Saint Joseph’s College of Maine surprised over 500 students graduating at the 106th Commencement ceremony by revealing the new Monk mascot character. Saint Joseph’s is the only college or university in the United States, in any NCAA division, to have “Monks” as a mascot. 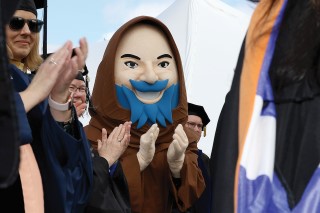 According to Vice President and Chief Advancement Officer Joanne Bean, the new Monk mascot costume was made possible because of the support given from alumnus and Board of Trustee Dr. Colonel Solis ‘93, BSBA, MA, MBA, MPhil, DBA, PhD of McLean, Virginia who worked with the advancement and athletics departments to enhance the presence of the Monk in the community, to better reflect the Monks logo currently used by the athletic teams, and to serve as a reminder of the College’s Core Values.

Solis, who is the son of Cuban immigrants and a decorated Vietnam veteran, said, “When you’re a U.S. Marine, you remember and continue to live everything that it stands for. And when you’re a Monk, it’s also symbolic and meaningful for life. A mascot elevates the spirit of the entire student community on campus. I’m very pleased to give back to the College.”

The Monks mascot at Saint Joseph’s College of Maine dates back to 1970. It was only one year after the Board of Trustees decided that the College would become co-educational that then College President Bernard P. Currier hired Christopher Kiernan from Assumption College to become the new director of athletics and to launch a competitive varsity program. Knowing that Assumption Prep was about to close its doors, Kiernan asked for a donation of their team uniforms which bore the name “Monks.” From that point forward, Saint Joseph’s College adopted this as its mascot.

The suit was designed and produced by Costume Specialists in Columbus, Ohio. Their work with other universities includes the Columbia Lion and Princeton Tiger.

The community can look forward to seeing the Monk at sporting events, student activities, and alumni gatherings.