The Sebago Lakes Region Chamber of Commerce hosted their third annual legislative forum on Saturday, March 30 at Saint Joseph’s College Alfond Center from 10 a.m. to noon. The first 30 minutes was dedicated to networking, coffee and conversation with an opportunity for area business owners, residents and local town officials to discuss with their delegates the concerns, issues and public policies that affect the Lakes Region area.

The morning’s event began with a welcome by Dr. James Dlugos, President of Saint Joseph’s 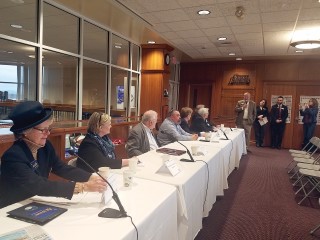 Town Manager, Don Willard, was the first to begin the answer and question portion of the event. After thanking the legislators for their time, Willard stated that he has attended the forum all three years. “Each time, I check in to see where the process is on the state level regarding broadband internet.” He said.

General responses from the delegates stated that there are positive steps being made. “The new administration is committed to in a big way,” Diamond said but added that there were financial challenges as part of the work in progress.

Another constituent in the audience brought up the concern regarding the pressure local school boards face due to unfunded education mandates and the issue surrounding the 55% funding formula. The general consensus of the delegates was that there are many variables that come into play and that the formula used is based upon a region’s need and year to year costs. “This formula is very complicated, and I don’t know if we can get to a truly 55% funding number,” Ordway said.

Windham Town Councilman, Jarrod Maxfield, expressed his concerns regarding Windham’s infrastructure challenges that include sewers, roads as well as broadband internet. “Due to the environment we are seeing on our lakes and watersheds, and the fact that phosphorus is a contributing factor, I would like to see septic tank inspections.” Fay responded saying that she was a sponsor of a bill to support this very issue, making septic tank inspections a requirement for lake shore line residents during a sale transaction. “The bill has passed the House and it seems to be getting a lot of bipartisan support,” Fay said.

The concern regarding minimum wage requirements was also discussed with a sentiment that the increased wages can be a challenge for the small business owner. “Those who are promoting these wages may not know the costs it takes to own a small businesses in Maine,” both Corey and Diamond concurred.

This topic lead to the challenge faced not only by the Lakes Region area but the whole State of Maine, and that is the topic of workforce shortage.

“We need to find a way to attract young people to Maine or to stay in Maine,” Ordway said. “We need to think outside the box.”

A 2016 Saint Joseph College graduate, Dominic McQuire who is employed by the college in the Department of Information Technology spoke about his perspective on the subject as a young adult who is originally from California. “There is something that lacks here and that is wireless technology,” McQuire began. “An up-to-date wireless infrastructure is one major factor and is what’s going to keep people here.”

The Chamber plans to continue this question and answer venue in the future. Those who wish to be included in future announcements such as these, should follow the Sebago Lakes Region Chamber of Commerce on Facebook or sign up for their e-newsletter on the homepage of their website: www.SebagoLakesChamber.com.