According to the Lakes Environmental Association (LEA) website, watermilfoils are rooted, submerged aquatic plants found naturally in lakes and streams. Five varieties of watermilfoils are native to Maine and are part of the natural lake ecosystem. Two non-native watermilfoils threaten the quality of Maine fresh waters; Variable leaf milfoil (myriophyllum heterophyllum) is already present in 27 Maine lakes systems, including streams. Eurasian watermilfoil (myriophyllum spicatum), the more aggressive colonizer of the two, has been found in several Maine water bodies.

The LEA website also states that many invasive aquatic plants were first transported as ornamental
aquarium plants. When aquaria were emptied into lakes or streams, the plants proliferated in their new environment. Variable leaf milfoil was first recorded in Maine in 1970 in Sebago Lake.

Perhaps from there and with the addition of a boat ramp, variable leaf milfoil found its way to Little Sebago Lake. It was in the late 1990s when the first reports came in that Little Sebago was in trouble.

"Areas of the lake were filled with milfoil and we knew we had to do something about it immediately,” stated the President of the Little Sebago Lake Association (LSLA) Pam Wilkinson.

“After a couple of years of hand pulling with volunteers, we knew this was not the best approach.
Luckily, we had an engineer in our association who developed a pontoon boat in such a way that, with using the help of a professional diver, we are able to remove the milfoil without having to wait for an answer on what to do.”

The suction dredge has an innovative ‘vacuum’ type Venturi pump attached to a 50 foot hose that their professional diver, Jim MacNaught, uses to extract the milfoil as he dives down to pull the invasive plant roots from the lake floor. The milfoil then flows through the hose and into a trough on the boat. The trough has a set of four gates that allows the milfoil to drop into onion bags twice filtering the water before going back into the lake. The boat has become a model that LEA and other lake associations have re-developed to fit their needs in order to work on their own milfoil extraction.

“When we began removing the milfoil, we were removing up to 100 bags a day,” Wilkinson explained. “Now, 20 years later, we are down to maybe six or seven bags a day. At its peak in 2008-2010 we removed over 1,700 bags each year. In the last few years we have removed about 170 bags each year and it is declining.  It’s gone from being a plant that could be found almost everywhere in the lake to a search and retrieve method rotating periodically to each of the 30 locations on the lake. It has become that sparse.” 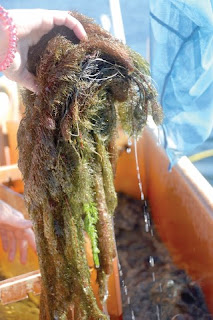 Once the milfoil is removed, it is taken to be used as compost. In recent years, co-milfoil director, Tim Greer, personally takes it to the town of Gray’s compost – where townspeople can use the nutrient rich compost in their gardens.

The Maine DEP recently visited Little Sebago and complimented on the work the association has put forth. Although very proud of their accomplishments, Wilkinson warns that if left unchecked, milfoil can return in an aggressive manner, choking the lake from its natural habitat.  Other invasive threats and algae occurrences are concerns on the horizon. Clearing of vegetation and adding sand threatens the nutrient balance of the lake. People should take measures to enhance their shorelines to decrease runoff into the lake.  “It can all flip around in just one summer.”

Variable leaf and Eurasian milfoil can reproduce by fragmentation. LEA explains that when a
disturbance like a motorboat or fishing lure passes through a colony of plants, the chopped-up pieces are each capable of forming a new plant. Milfoil can move from lake to lake on a propeller, trailer, fishing gear or anchor. “It can even be transferred from lake to lake by a bird,” Wilkinson said.

The dense growth and rapid spread of milfoil along lake shores dramatically impedes swimming and fishing. This factor hinders the value of the lakes, both in terms of home property values and tourism dollars that the state depends upon every year. But perhaps more importantly are the ecological and environmental impacts these invasive plants have on the lake.

LEA website states, “Ecological impacts of invasive plants are difficult to enumerate. The most   Invasive plants like variable leaf milfoil are free from their natural competitors and can out compete native plants for space and sunlight.
obvious impact they have upon native communities is out competition. In an organism’s native habitat its growth and spread are balanced by other organisms that have evolved to compete with or eat it.

The implications of the loss of native plants are far reaching. Native plants act as both a food source and habitat. By changing the available habitat and food source, invasive plants can drastically alter delicate relationships in the food web.”

Wilkinson, who has been diligently leading the milfoil removal program with the aid of Tim Greer, reminds lake residents that the lake association can always use help in identifying milfoil around the lakefront areas. “We provide buoys for all residents,” began Wilkinson. “If a resident sees a milfoil plant – all they need to do is place a buoy near the area and let us know and we will come and remove it if it is not a native plant. We want to take the plant from the lake as quickly as possible and having residents help us identify where a new plant is will keep the lake clear of this invasive plant.”

Wilkinson’s dedication to this cause is not going unnoticed. “She has been a long-time leader and she is someone that people look up to,” stated Jim McBride, treasurer of the association. “She has been on the board for 30 years, over 10 years of which she has been president. Her leadership is one of the reasons why we have a beautiful lake for everyone to enjoy.”

To become more knowledgeable or to contact a plant patroller visit www.lakestewardsofmaine.org .

Little Sebago Lake residents who wish to learn more about milfoil extraction, help with an adopt a shoreline program or to become an active member in the association, visit littlesebagolake.com, contact Pam Wilkinson at pwilkinson@littlesebagolake.com or call 207.809.4706.