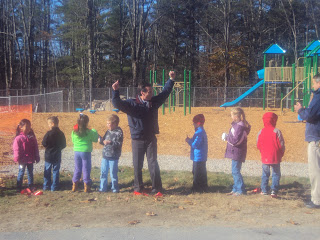 Squeals of delight and loud cheers filled the air at Windham Primary School on Monday morning as students participated in the playground dedication ceremony and explored the new equipment for the first time. 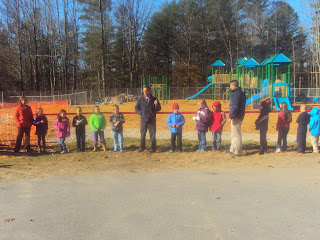 Dr. Kyle Rhoads, principal of Windham Primary School, lined up with students along the red ribbon to say a few words. “Boys and Girls, isn’t this exciting?” he asked. The response was an enthusiastic “YES!”  Before cutting the ribbon, Dr. Rhoads thanked the many people who have been involved in bringing the playground from an idea to reality, including the playground committee and its chairperson, Michelle Jordan; the school board and superintendent Sandy Prince; Bill Hansen, Facilities Director for RSU 14; Eric Welzel from Miracle, the company that supplied the equipment; and all the volunteers and supporters in the community.

Then, the children cut the ribbon, gave a “big Windham Primary cheer” and ran off to play.

“Seeing all the kids running around and smiling and laughing is what makes it all worthwhile. I’m happy that we were able to do it in two parts. It’s a great feeling today,” said Jordan after the ceremony. The project still has a long way to go, with more fundraising in the works, including a spaghetti dinner on November 15th and some events with local businesses over the winter, said Jordan. “The money that we raise will help to enhance the playground system, above what the school board has allocated for the playground equipment. We can make it bigger and better, and we can also pay for the extra components of the playground area,” she said.  Jordan is confident that the committee will reach their $50,000 goal by the end of the school year.

Hansen said the current plan is to install the second playground pod next summer. The funding for that portion of the project has already been approved by the school board, but delays in the permit process didn’t leave enough time for both to be installed this year.  Two other elements of the larger project have also been approved – a staff parking lot and new bus and parent drop-off circles will also be installed next summer, Hansen said. 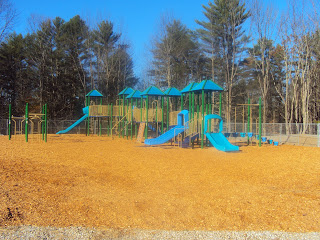 A fourth element, which has not yet been approved for funding, would expand the area to include a ball field, a multipurpose field, and increase the overall square footage of the play area to almost double its size, Hansen said. The entire area would be enclosed by a safety fence. Hansen said he is proposing that the money needed for that final phase, which is between $600,000 and $700,000, be put into his budget for next year. The completed project would bring the play space area to where it should be for the number of children on site said Hansen, as well as keeping the children in one defined area with clear boundaries.

Bringing this first phase to completion was a cooperative effort, and included input from educators, occupational and physical therapists, behavior specialists and a playground monitor, to be sure the playground would incorporate all the elements necessary to meet the needs of all children, said Hansen. 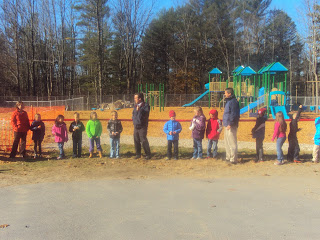 Support from the community made a huge difference. The community build, orchestrated and supervised by Welzel, helped keep costs down, extending the buying power for the project, said Hansen. “It was a great way for people to contribute. We had some talented people, really skillful people came here to work and work hard,” he said. “Some parents did some wonderful things and it really helped tremendously.”