100th Anniversay of the Boy Scouts' Order of the Arrow


Maine Boy Scouts will be celebrated the 100th anniversary of the Boy Scouts of America’s Order of the Arrow on July 16th at Camp William Hinds with the national ArrowTour event.


The Order of the Arrow (OA) is the Boy Scouts of America’s National Honor Society, and its members are scouts who best exemplify the Scout Oath and Law in their daily lives and who encourage and participate in camping, responsible outdoor adventure, environmental stewardship and community service. 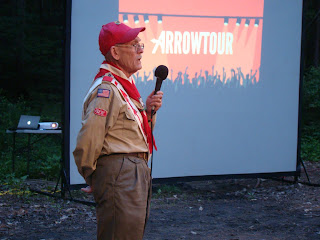 There are 178,000 members of the OA nationwide, and 900 in Maine. Clyde Nason from Troop 800 in Raymond was the oldest Scout at the event and the oldest living member of the local Order of the Arrow chapter.

The ArrowTour’s stop at Camp Hinds in Raymond was one of 110 it will make nationwide.
In addition to displays discussing the 100 years of the OA, Scouts were able to do silk-screening, branding of leather goods, challenge games and see individual lodge exhibitions. 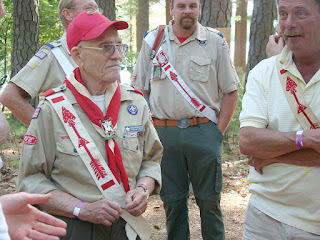 The event closed with a campfire, and featured storytelling and the presentation of the Centurion Award to Bruce Rueger, Francis Maguire, Paul Conley, Joshua Gagnon, Eri Martin, Scott Valcourt, Michael Mirisola and Wayne Holden. There are only 700 in the country who have received that honor.

The Order of the Arrow was founded by Dr. E. Urner Goodman and Carroll A. Edson in 1915 at the Treasure Island Camp of the Philadelphia Council, Boy Scouts of America. It became an official program experiment in 1922, and was approved as part of the Scouting program in 1934. In 1948, the OA, recognized as the BSA's national brotherhood of honor campers, became an official part of the Boy Scouts of America. In 1998, the Order of the Arrow became recognized as Scouting's National Honor Society when it expanded its reach beyond camping to include broader service to Scouting and the community.