Emily Wainwright and her co-chair Brian Casalinova held the first of hopefully many beer and wine tasting parties over the next few years. Cheers for a Cure took place last Saturday in the parking lot of Metayer Family Eyecare, with eight vendors and almost 150 people stopping by to support the cause and do some sampling of local beers and wines. 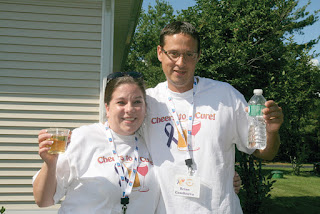 The American Cancer Society was the lucky recipient of the more than $4,000 raised through the tasting, an auction and children’s events, including a juice tasting donated by Trader Joes.

The idea for the event came after the Relay for Life was moved to Gray this year, leaving Windham and the lakes area without an ACS fundraiser. The society approached Wainwright and asked if she would run an event. Ideas were tossed out like a zombie or color-run. 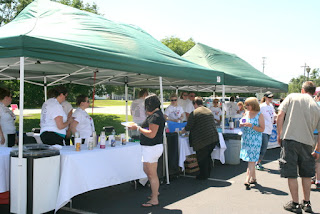 “Not everyone is a runner,” she said. Making the event family friendly and having a barbeque added to the attendance. “The beer and wine perked people’s interest. The barbeque was a bonus,” Wainwright said. The beer was donated by local breweries like Geary’s Brewing, Sebago Brewing, Shipyard Brewing, Baxter Brewing, Nappi Distributors and Funky Bow Brewery. Buck’s Naked BBQ donated the wine.

“We had a pretty wide range of people. The kid part went well,” said Wainwright. There was a bounce house and a bean bag game, but next year she hopes to expand that part of the event. 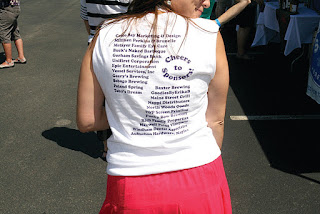 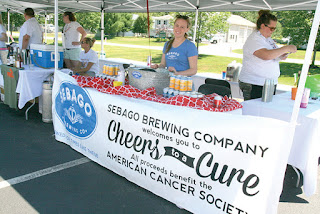 Posted by Michelle Libby at 9:36 AM