What do firefighting apparel, baby strollers and hot rods have in common? All are utilized to help raise thousands of dollars toward the careers of first-responders. Two significant fund raisers, Fit-4-Duty and Rick’s Ride, will take place within a three week period in memory of widely known and passionate firefighter and emergency medical technician (EMT) Rick Duncanson. 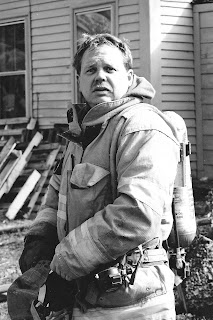 Duncanson joined Windham’s (then) all-volunteer fire department in 1986 and was generally known throughout his quarter-century career as a fully committed and passionate first responder, helping the department grow, improve and modernize. He died suddenly and unexpectedly in 2012, leaving a wife, two college age daughters and a newborn grandson. A scholarship bearing his name was established immediately (literally, during funeral arrangements) through an account at Evergreen Credit Union.


Donations poured in from a sympathetic and supportive community. The pair of fundraisers that embody athleticism, wits and family fun, now in their third year, support up to three scholarships. Two are awarded to area high school seniors seeking a career in firefighting or EMS. The other is given to an individual already in the field and pursuing a higher educational level - for example an EMT who is studying to become a paramedic.

Fit-4-Duty is a 5K race employing teams of four participants competing in one of four divisions: Public safety, civilian, family stroller and individual team challenges. In addition to established events, some teams invent games. One race involves pushing baby strollers; another pits fire, safety and law enforcement officials running in full gear against one another. Medals are awarded in each division and in age categories.

According to event coordinator Lisa Duncanson, teams self-form, challenge other teams, and race in the spirit of good-natured competitiveness and fun. Participants can pre-register at $25, or $30 the day of the race, which kicks off at 9 a.m., Saturday, August 22 at Windham High School.

Rick’s Ride participants in hot rods, motorcycles and classic cars gather at the Windham Veterans Center (behind Hannaford’s) at 9 a.m. on September 12. Each vehicle receives game rules and maps, drives around the region locating specially prepared playing cards – firefighting and EMS symbols - that will later translate into poker hands. Upon return, there’s a barbeque, music and prizes.

Windham deputy fire chief John Wescott did not mince words in recalling his association with Duncanson: “He was the fireman’s firefighter, our glue on weekends (Duncanson’s main work shift), a consummate professional and good man.”

John Brennan, a captain in the North Windham fire house, commented at length about Duncanson’s commitment to younger, newer members of the department.

“He was a mentor,” he said. “He demonstrated the importance of taking pride and ownership in the service of community.” He felt that the station, the apparatus and contact with community members should always reflect the trust and confidence afforded first responders. “He was all about team spirit.”
Brennan said Duncanson and his family would host a Christmas party each year, in part to promote team building among co-workers. He died only a few days after the 2012 party.

What he was about is summed up on a simple plaque which hangs in the day room of the North Windham fire house. It reads “Lieut. Rick Duncanson Memorial Pride & Ownership Award.” Below are the names of individuals who earned the annual honor, presented each year by his wife, Lisa Duncanson…at the Christmas party.
Posted by Michelle Libby at 9:33 AM