Ron and Dusti Faucher are at Dundee Park around the clock many days in their role as park managers, ensuring that the recreational area operates smoothly. Not only do they work full time hours making sure the area is clean, in good repair, and managed appropriately, but the pair also lives in a camper at the park, keeping an eye on the property overnight as well.

The Fauchers have stayed at the park during the summer season for five years now. After living in Windham for close to 20 years, they sold their house on Covered Bridge Road and bought a camper when Ron retired from the Portland Water District in 2007. 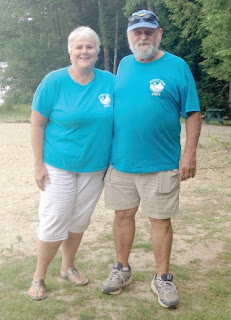 They bought a double wide mobile home in a 55-plus community in Hobe Sound, Florida where they spend their winters. During the summer months, they were living on their daughter’s property in Casco. When she moved, they needed to find another place to park.

After hearing that there was an unoccupied space at Dundee Park, they explored the option. They came to the park in 2011, sharing a full time position as co-manager. After that first year, Ron took on the position on his own, co-managing the park with Mona Dodd.

Dodd retired before this season, and the Fauchers became the full time co-managers. Ron handles maintenance and building issues, while Dusti manages the staff, does the paperwork, and ensures that patrons are happy. Another big part of their job, said Ron, is enforcing park rules. As a family oriented facility, no vulgar language, alcohol or smoking is allowed.

They have a great staff, Dusti said, including two long time employees that cover Friday and Saturday when the Fauchers are off. “We’re trying each year to do something a little bit better, a little bit differently, and make improvements,” she added.

This year, the parks and recreation committee decided to host a concert series at the park. The first concert, held on July 13th, was very successful Ron said. He said they counted 250 people, but thinks they missed a lot since people were parking up the road and walking in. To help collect data on how successful the concerts are, he said they will likely put someone at the gate next time to track attendance. 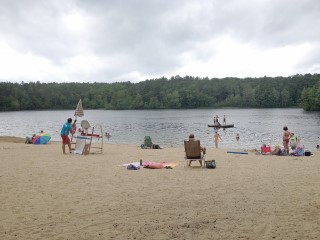 “I think one of the reasons for the concerts is to help people find this place, let them know what’s here, how beautiful it is and what a resource it is for people who have never come here before,” said Dusti.
Both Dusti and Ron have always been involved in environmental issues. Ron worked for the water district, and Dusti has been involved in the Friends of the Presumpscot River since its inception in 1992. She served as president of the organization for many years.

Being back in Windham, close to family, and living on the river are all perks of the role as park managers, Dusti said. “We love being here. I love this spot, it’s absolutely a beautiful place,” she said. Working with the young people on staff is a new experience that she is enjoying as well. “I’ve had management positions before but not with teenagers. It’s interesting and they’re fun - We have a really good group of kids.”

Dundee Park is situated on the banks of the Presumpscot River, and offers recreational activities including swimming, volleyball and basketball courts, horseshoe pits, grassy areas and picnic tables. Lifeguards are on duty during peak hours. The park is open from 8 a.m. to 8 p.m. daily until mid-August, and until 7 p.m. daily from mid-August until Labor Day. Season vehicle passes are available (up to 15 passengers) for $50 for Windham residents, and $65 for non-residents. Passes can be purchased online, at the park, or at the Parks and Recreation office. For more information, visit http://windhamrecreation.com/info/ or call the park at 893-2415.
Posted by Michelle Libby at 2:01 AM