The focus of D.A.R.E. graduation: Making good decisions and being a positive role model by Lorraine Glowczak 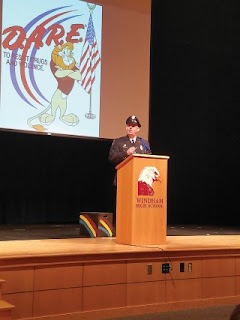 Over 180 fifth-grade students at Manchester School donned orange t-shirts with the logo, “Be The Influence” as they marched into the Windham High School Auditorium on Tuesday, June 13 to celebrate their successful completion and graduation from the Drug Abuse Resistance Education (D.A.R.E) Program. This culmination event marks the point at which the students make a pledge to resist the use drugs, alcohol or participate in bullying and violent behavior.


As with most graduation ceremonies, the event began with a welcome and an introduction by Principal Danielle Donnini, who reminded the students of the benefits of positive decision making and, “to help yourself and others feel respected and safe.”

Donnini thanked and then introduced Windham Police Officer Matt Cyr. Cyr has been leading and teaching the D.A.R.E. Program for more than 17 years; working with both students and teachers in the classroom through a 10-week interactive education curriculum on the many drug, alcohol and bullying related issues that students face today.

Cyr introduced the Commencement Speaker, Chief Kevin Schofield of the Windham Police Department. Schofield, who has also taught in the D.A.R.E. Program, began his speech by thanking the families and teachers that are supportive and allow the police department to teach this program within the school.

To the students, he offered a few pieces of advice. “Don’t let this graduation be the end of your relationship with the police department,” Schofield began. “Help a friend in need, don’t bully others and consider joining a civic organization,” were words of wisdom he shared in regards to being a good citizen. 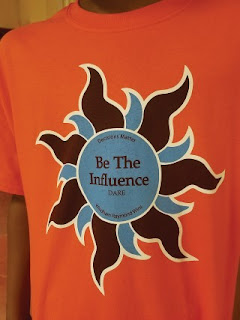 Cyr ended the commencement ceremonies with a few last words of wisdom. He reminded parents, “We have to be the influence to show the children how to make good choices.” To the rest of the audience members, he shared advice from some of the other students. The one piece of advice he shared from one fifth-grade student was, “Sometimes you have to decide between what is right and what is easy.”

The D.A.R.E. Program was founded in Los Angeles in 1983 and has been a part of the RSU14 educational program for approximately 20 years. The program works closely and in conjunction with the Windham/Raymond “Be The Influence” Coalition, a community based initiative that promotes healthy lifestyle choices.

It also encourages both students and adults alike to “Be The Influence” in making positive decisions. For more information regarding D.A.R.E., check the website at www.dare.com. For more information regarding the Windham/Raymond “Be The Influence” Coalition, contact www.betheinfluencewrw.org/community_stakehold
Posted by The Windham Eagle at 5:29 AM