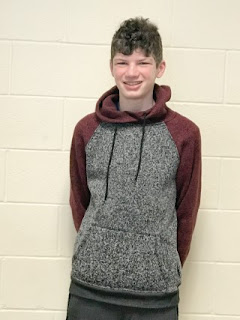 Matthew Fox has an interest in geography that helped him claim the top spot in the Windham Middle School Geography Bee three years in a row. Fox is also one of 100 students statewide to qualify for the state Geography Bee, which will be held on April 6th at the University of Maine at Farmington.

Winning three years in a row felt good, Fox said. His favorite win was when he was a sixth grader and beat a friend’s older brother. He was nervous about the competition in seventh grade, Fox said, but won again. This year he said he hoped to win again, but added, “I was pretty proud of myself either way.”

This third win came after a tiebreaker round Fox described as stressful. He and runner up, Waylon MacDonald, were both holding on Fox said, answering the same questions correctly – or incorrectly. This year, he said, the questions felt harder. “There were more things I didn’t know than last year or the year before,” he said.

Fox said he has always been interested in geography. His father is a social studies teacher in Falmouth, which helps, he added. To study for the geography bee, Fox said he looks at maps and takes online quizzes about regions he is less familiar with. Areas he’d like to learn more about include North Africa and the Middle East.

Fox lives in Windham with his parents and a younger sister. In addition to geography, Fox is interested in sports, and he participates in basketball, track and soccer.  He said anyone thinking about signing up for the geography bee next year should just give it a shot. “I didn’t expect to win when I did it, but you never know. It’s fun.  If you’re feeling confident about it, I say go for it.”