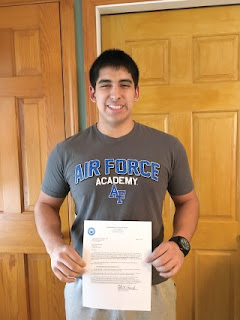 “Acceptance to a U.S. service academy is extremely competitive and reflects highly on a student’s scholarship, community service, and character,” said Pingree. “Along with all the other Maine students my office nominated, James has demonstrated an incredible commitment to serving the country and a maturity well beyond his years. I’m very proud that he was accepted to the Air Force Academy and wish him the very best in his time there.”

Mannette graduated from Windham High School last May and currently attends the University of Southern Maine.

“The brave men and women who risk their lives every day for the greater good is what makes America a country of which I am proud to be a citizen,” Mannette wrote in his letter requesting a nomination. “I hope to devote myself to a life of service. By attending a service academy, I will begin to fulfill my long-held dream of working selflessly alongside brothers and sisters in arms for the good of our country.”

To be considered for an appointment to a service academy, applicants must be nominated by an authorized nominating source, which includes Members of Congress.

Posted by The Windham Eagle at 8:46 AM