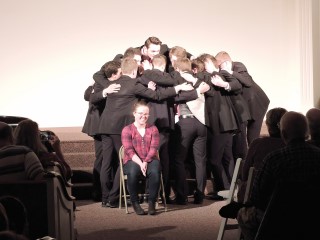 The Windham Chamber Singers performed to a sold-out crowd on Saturday evening, April 7 at the North Windham Union Church. Performing for family and friends of the Greater Windham and Raymond Areas, before they set out on their weeklong tour, the talented students were introduced most appropriately by Rev. Debra Girard as having “the voices of angels.”


The singers, under the leadership of Dr. Richard Nickerson, performed a variety of musical scores. The first half of the concert entailed a somber and serious performance while the second half courted a light-hearted tone.

Many of the singers performed solos. Libby McBride sang a solo entitled, “Only in Sleep.” “That was the first time I had heard that piece,” began Libby’s father, Jim, “So as you can imagine I was bursting with pride! She is a senior and heading out on her final tour with Dr. Nick and the group that has meant so much to her over the past four years.”

The group left for their tour on Wednesday afternoon, April 11 to perform in schools and churches throughout New England and Canada. “Our first performance will be Wednesday evening in North Conway, NH,” stated Dr. Nickerson. “On Thursday, we will perform in Bartlett, NH and Moretown, VT followed by another formal evening concert in Burlington.”

From there, the singers will have an afternoon concert at the Notre Dame Basilica in Montreal Friday afternoon. Later in the evening they will share a concert with Les Petits Chanteurs de Laval in Laval, Quebec. “They are one of Canada’s premier youth choirs and we are thrilled to perform with them,” Dr. Nickerson said.

After a free day to explore, the singers will have their final formal concert of the tour at Westmount Baptist Church in Montreal Saturday evening, returning to Windham on Sunday afternoon in time for Spring Break.

Posted by The Windham Eagle at 5:48 AM