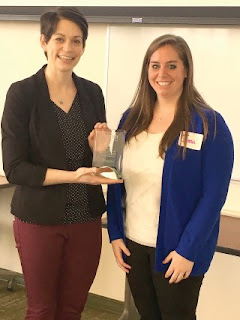 At an awards ceremony held in Augusta on March 29, Saint Joseph’s College received the Gold Star Standard of Excellence for the third year in a row; and Jenna Chase,Windham resident and
McAuley High School graduate who is the Assistant Director of Campus Recreation, Fitness & Wellness, was named one of two Individual Gold Star Champions statewide.


After presenting the college and Chase with their awards, the Breathe Easy Coalition of Maine hosted a luncheon to allow an opportunity for schools to further discuss the successes and challenges of addressing tobacco use on campus.

Saint Joseph’s College first implemented a campus wide tobacco-free initiative in August 2013 to improve the health of students, faculty, staff, and visitors. In the years since, the college has advanced from the Silver to Gold Star Standard of Excellence.

The Gold Star Standards of Excellence Program recognizes Maine’s post-secondary institutions of higher education for their work to create and support tobacco-free environments and lifestyles. Each year schools are recognized at the bronze, silver or gold level based, on how many of the 10 best practice Gold Star Standards are met.

To earn gold, Saint Joseph’s had to receive stars in all 10 of the program’s outlined standards, which included initiating a 100 percent smoke and tobacco-free campus policy, strictly enforcing said policy, and offering support for and education about, the dangers of tobacco usage. Building upon efforts that began when the policy was first announced in 2013, this year the members of the college pushed to install more prominent signage, declaring the campus as a tobacco-free space.

The Breathe Easy Coalition reminds citizens that tobacco use remains the leading cause of preventable death and disease in Maine and the United States. The “Preventing Tobacco Use among Youth and Young Adults: A Report of the Surgeon General” (2012), states that 99 percent of smokers begin before the age of 26. Creating tobacco-free social norms through the adoption of strong policies, offering education about the harmful effects of use and exposure, and providing supports in quitting, can help reduce the number of young adults that become daily tobacco users.

For more information on the college’s tobacco-free policy, please contact Jenna Chase at jchase@sjcme.edu.
Posted by The Windham Eagle at 5:56 AM