MSAD15 asking voters for $7 million in imporvements - By Tracy Scheckel


The Gray and New Gloucester School District, MSAD 15, will place a bond referendum on the November ballot for building additions and renovations as well as field improvements and enhancements. The referendum question, which will ask for a sum not to exceed $7,361,080, if approved, will address several areas of need determined by a district facilities study conducted by Stephen Blatt Architects.

According to the Blatt report, “the GNG Middle School is the facility with the greatest number of critical needs in the district, in terms of both facility condition and program accommodation.”
According to district officials, music classes are being taught on the stage in the cafeteria and other classes are being taught with rolling carts due to lack of classroom space.

The proposed work at the middle school accounts for nearly $2.4 million of the requested funds and will provide for the addition of four classrooms and related small group instruction/student support areas as well as improvements to the parking area and bus loop. Another area to be addressed at the middle school is a roof drainage problem at the entrance courtyard. Currently, the roof runoff is deteriorating the building façade and structure in that area. Blatt has proposed the construction of a flat roof with an interior drainage system to replace the existing roof in order to mitigate future drainage issues. In addition to the associated repairs to the masonry facade, an existing chimney that is down-drafting during certain weather conditions is proposed to be replaced.

Based on its enrollment projections, the Blatt report indicates that the proposed additions at the middle school should meet demands more efficiently than reorganizing and moving grades between schools since enrollment is expected to increase through the 2017 – 2018 school year and then level off. Another benefit is that by adding the classrooms, two existing rooms can be repurposed into science labs.

At GNG High School, the primary interior project is to renovate and upgrade the chemistry labs. According to both school officials and the Blatt report, the lab equipment is extremely outdated as is the classroom configurations. Utilities to the lab tables are currently provided via an overhead ‘drop down’ system and create a visual obstruction between teacher and students. The proposed renovation would deliver utilities to new stations up through the floor as well as provide two new vent hooded work stations. One of the two lab rooms currently has no windows; the proposed plan provides the addition of two windows to that room. The total estimated cost for the interior renovations at the high school is approximately $500,000 including new chemistry equipment for the classrooms.

In November of 2012, voters approved a capital expenditure to purchase land at the northern corner of the high school property and to do a feasibility study for the athletic fields. The third component to the proposed plan, based on the field assessments conducted by Sevee & Maher Engineers Inc., is to construct new athletic fields in two phases at the high school.

Phase 1 proposes to utilize the newly purchased land to construct three regulation fields. One for baseball, and two softball fields whose overlapping area could double as an additional field, as well as a multi-use practice field. Included in that phase is an access road to the new fields and parking.

Phase 2 proposes to address the existing football/soccer competition field and oval running track. The existing track is one-quarter mile, but longer and narrower than regulations require for hosting large competitions. If the voters approve, the track and field would be relocated toward the area where the baseball and softball fields were moved from. According to staff, this will allow for the proper proportions of the oval and the potential to hosting events and reap the associated revenue that comes with them.

Incorporated with the track oval is the football/soccer competition field, which according to MSAD 15 personnel has not been touched in nearly 30 years and is dire need. The district has been investigating the benefits of installing an artificial turf field, and has included that projected cost in the referendum. The estimated cost for phase 1 is approximately $2.5 million, and the cost for phase 2 is approximately $2 million.

Included in that phase 2 total is the $738,000 cost for artificial turf instead of natural sod. According to its manufacturers, the life cycle cost analysis of artificial turf offsets the initial cost of installation by reducing the cost of annual maintenance and increasing the usability of the field. According to information provided by NET Eastern Builders, artificial turf eliminates the need to rotate fields. Some research suggests that not only can the artificial fields be used for a longer season; they can be used more often and in some cases artificial turf can triple to use capacity of a natural field. 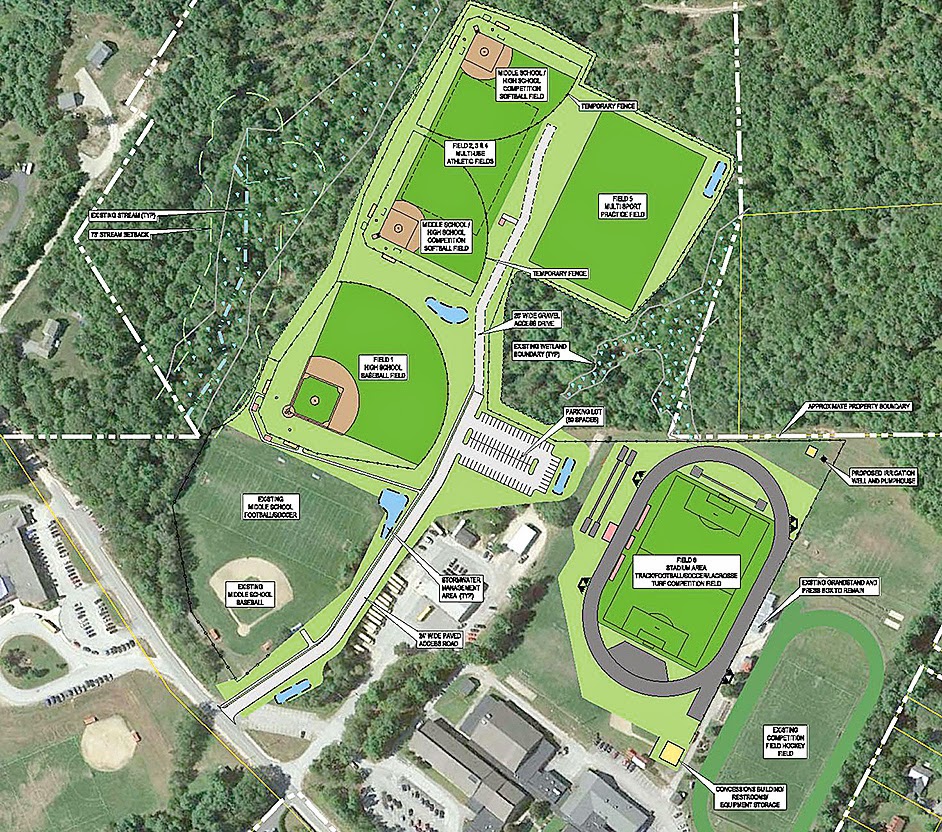 So what will this cost the average homeowner? According to Diane Boucher, MSAD 15 Director of Finance and Operations terms are still being worked out. According to Boucher, the district is looking at the best way to proceed. The interest rate and term have not been determined as yet, but according to Boucher, the term is likely to be 20 to 25 years. The details of the term, rate and tax impact are expected to be available at a series of public forums.

MSAD 15 Superintendent, Bruce Beasley, emphasized that, “This referendum addresses only the highest priority items from the Blatt report. As a matter of fact, the school board actually cut the initial proposal by nearly $500,000.” Beasley is planning three public forums to share information about the referendum. They are scheduled for Oct. 6 at Memorial School, Oct. 14 at the GNGHS Library, and Oct. 23 at the middle school. All of the forums will be conducted between 6 p.m. and 8 p.m.