Unity of Greater Portland (UGP) recently completed work on a light tower that was part of the original vision for the building when the property was first purchased in 1991. On Saturday, November 22nd, 2015, the light tower was dedicated to the late Rev. Audrey McGinnis, in honor of her service as minister at UGP from 1986-1994.

The ceremony was held in the sanctuary of UGP at 54 River Road in Windham. Rev. Pat Bessey led the ceremony. “We see the light tower as a beacon of light for the whole Greater Portland area,” she said in her introduction. The ceremony included heartfelt stories and memories of Rev. McGinnis and what she brought to UGP, shared by Bessey and members of the UGP community. 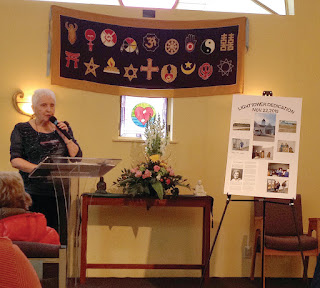 Bessey was a congregant and member of the board of trustees when the building was purchased in March of 1991. A former dance hall, the building needed a great deal of renovation, and though the light tower was part of the original plans, it was never completed.

Bessey began attending UGP in 1989. She was looking for a place to create a spiritual family, she said. When she found UGP, she said, “It felt like I came home.” She had found what she had been searching for. Bessey said it was McGinnis’ influence that inspired her to go to seminary. 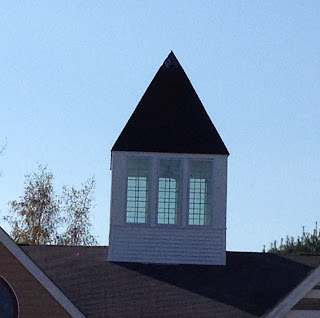 In August 2011 Bessey returned to UGP as their minister. It was her vision to see the light tower project finished, she said. “It felt like that was a completion piece that needed to happen.”

During the ceremony, Bessey said that now that the original plans have been completed, UGP can begin to think about expansion needed for the children’s programming. In addition to the new light tower, the UGP building includes a sanctuary, fellowship hall and kitchen, bookstore, classrooms and offices. On the grounds is a memorial meditation garden and labyrinth.

UGP offers a Sunday service and children’s programs, classes and workshops, and service opportunities in the greater Portland area. It is currently engaged in "A Season of Interfaith-Intercultural Celebration."  More information about UGP can be found at its website at www.unitygreaterportland.com.

Posted by Michelle Libby at 11:21 AM No comments:


When Donna Stephen retired as principal of Windham Primary School, she didn’t stop being an educator. Her efforts as a volunteer for Junior Achievement of Maine were recognized in mid-October when she was named the 2014-15 Volunteer of the Year. 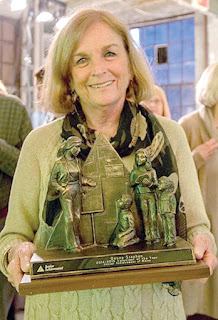 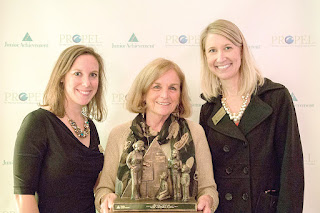 Junior Achievement (JA) is described on their website as “the world's largest organization dedicated to educating students in grades K-12 about entrepreneurship, work readiness and financial literacy through experiential, hands-on programs.”

All JA programs are taught by volunteers. “Our main goal is for students to be making connections between what they are learning in school and what they can do in real life,” said JA Maine President Michelle Anderson.

Stephen taught JA classes throughout the school while she was principal, and continued her involvement in her retirement, teaching the program in her grandchildren’s classrooms. When they moved on to the Manchester School, she went too, but the primary teachers still wanted her in their classrooms as well.
She has taught up to 15 classes a year, more than any other volunteer in the state, according to Anderson. “Donna is a shining example of a volunteer,” said Anderson. “She takes the curriculum and makes it her own. We are so grateful to have her.” 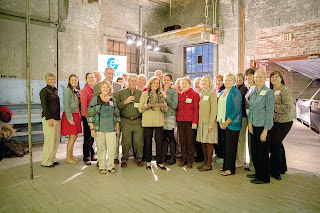 Stephen was honored at a volunteer thank you event, hosted by PROPEL, a young professionals group Anderson said has a strong connection with JA. Stephen is very well received by the teachers in classrooms, Anderson said, and is willing to go wherever she is needed. “She is a huge asset to our organization,” Anderson said.

Stephen said she believes in the JA curriculum completely, and feels it is a much needed missing link in education. She also said she thinks it’s good for children to see other people who believe in education coming into their classrooms.

The teachers understand the value of the JA curriculum as well, she said, and have been flexible in their scheduling to accommodate her needs. She added that she’s pleased that Windham has been involved in JA since the early 1990s.

Stephen was informed before the event that she would be honored, allowing her the opportunity to invite friends to celebrate with her. “I was delighted and I felt quite honored to have this award,” she said.

JA Maine is always looking for volunteers, said Anderson, since they try not to say no to any teacher who would like JA in their classroom. “The beauty is anyone can volunteer because everyone has unique life and work experience to share,” she said.

Posted by Michelle Libby at 11:16 AM No comments:


Peter Pan is a well-known story. There have been many renditions of the play and Windham taking on the challenge of a musical and flying was exciting for all involved. 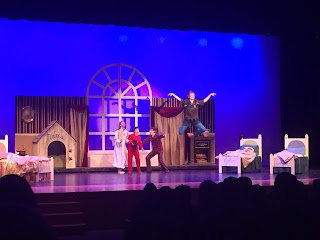 Peter Pan is the story of the little boy who won’t grow up and the Darling children who go on an adventure to Neverland with Peter to meet the lost boys, the Indians and pirates lead by Captain Hook.
The first time Peter Pan took off, there was a collective gasp. It looked so impressive from the audience. I know it was more than just the ability to fly. There are strong men in the wings playing the part of the fairy dust. Even knowing that, it was exciting to see how well the actors did with singing, twirling through the air and acting. They were professionals to the very end.

Peter Pan was played by Anna Giroux, who led the cast with great talent in singing, acting and flying. Alexis Wintle was Jane, Michael was Sam Barry and John was played by Will Wheaton. The three of them captured the wide-eyed excitement of children on an adventure. 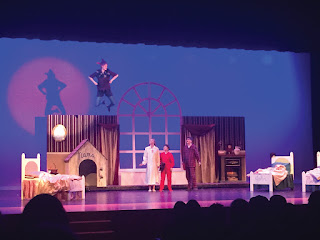 Andrew Shepard as Hook was my favorite character. He brought life to the part and it provided laugh out loud moments for the entire audience. Tiger Lily played by Jaydie Allen lead her band of girls in many soft shoe numbers. And Lana Pillsbury did an amazing pointe dance displaying her talent as a ballerina.
The only drawback to the show was the almost three hours in length and some scenes that didn’t move the story forward for me. 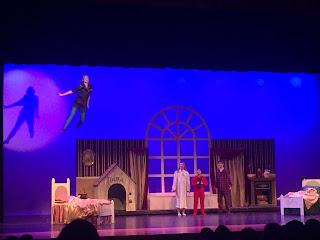 The music and lighting add to the mood of the play and were so flawless that it seamlessly woven with the other amazing things that went on on the stage.
That being said, it was totally worth the price of admission. There is one more weekend to fly away with Peter Pan on a grand adventure. Tickets are still on sale at the door for Friday (7 p.m.), Saturday (7 p.m.) and Sunday (2 p.m.) or call for reserved seating at 893-1742. 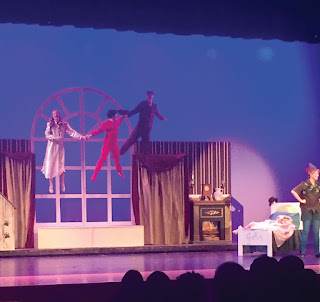 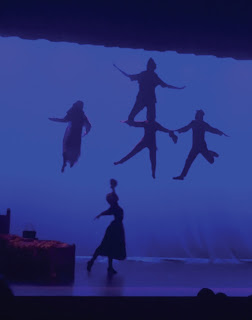 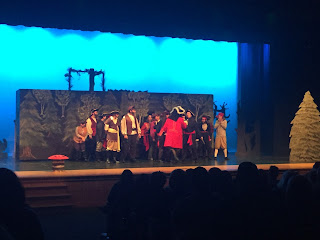 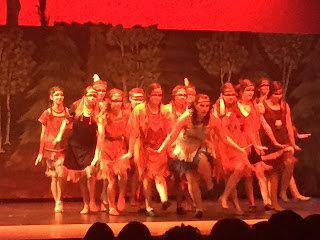 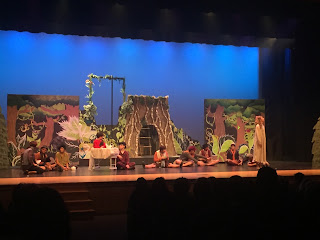 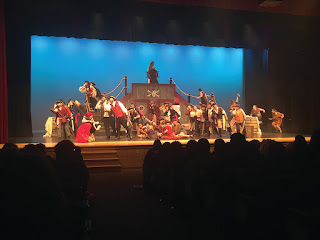 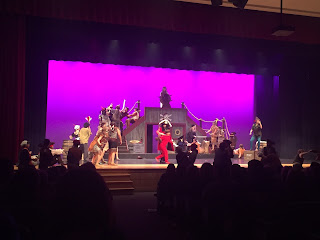 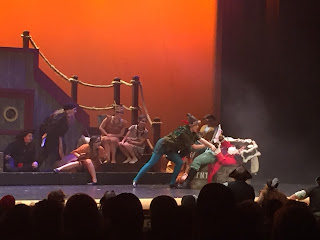 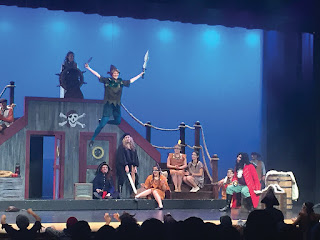 Posted by Michelle Libby at 4:29 PM No comments:


On Tuesday morning, about 15 first and second graders at Windham Christian Academy started their day by hosting a pancake breakfast for local Veterans.


According to first and second grade teacher Lynn Dodd, she was inspired by her husband’s 20 years of service to organize the breakfast. 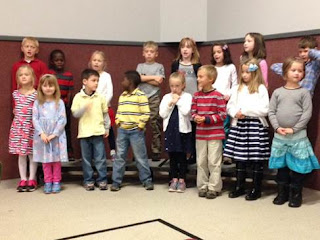 “[It’s] a very important history, and there’s not much of that teaching,” said Dodd.

Dodd said that the students were asked to find a Veteran in their community, interview them, and invite them to the breakfast. 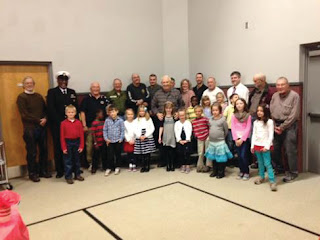 “It’s the first [breakfast], and first annual,” said Dodd. “It’s a really great learning experience. They’ve learned a lot about what it means to be a Veteran.”

Isaiah Irish, a student at Windham Christian Academy, was excited to interview a Veteran. 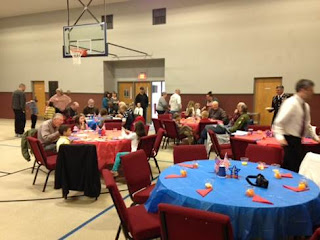 “I asked him how many years he had served,” said Irish. “I learned that running in boots is hard,” he said.
After the breakfast, the first and second graders recited a poem they memorized in honor of the Veterans, and presented them with gift baskets.

Veterans at the breakfast served in a number of military branches. A number of students brought their parents to the breakfast, some still on active duty. After the ceremony, the students were given poppies and given a brief history lesson on the US Flag.

“[Students] feel like they have a way to know about the freedoms that these people had to give up,” said Veteran Jennifer Eaton, who attended the ceremony with her son.
Posted by Michelle Libby at 12:25 PM No comments: 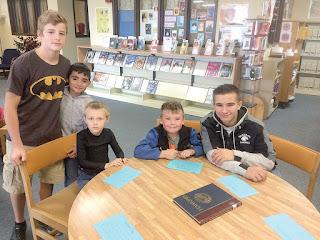 Emily Magoon, whose father has been in the service since when he was first deployed to Iraq in 2001, explained to her classmates and their second grade buddies what it is like to be a part of a military family and how much these care packages mean to those who are away. 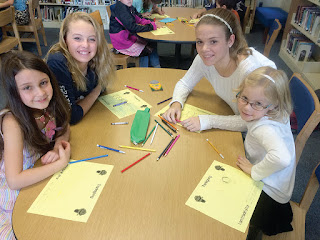 "It's been pretty interesting growing up in a military family and there has been a lot of really cool experience that I've gotten to have but there are also downsides, like sometimes it's really hard to be without your parent for a long time when they have to leave," said Magoon. Magoon also spoke about the importance of the care packages, explaining how these packages show the troops "people care about what they're doing and people are thankful for them.” The middle school students found their buddies after Magoon's presentation and started on their thank you cards.

The cards and candy from the eighth and second grade students will be sent to troops based out of New Hampshire, but are currently deployed in Afghanistan. Mrs. Mallard, one of the eighth grade teachers, said, "We're just hoping that it brightens their day.” 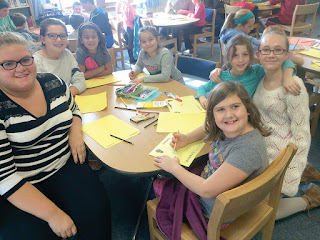 The Buddy Program at Windham Middle School is a program involving eighth and second grade students, where each month they meet together and do some activity that benefits someone else. Each middle school student gets their primary school buddy in September and continues meeting and molding that same buddy until the school year comes to an end in June. Mallard said she hopes the buddy program teaches the children "empathy and compassion" and lets them know that "there are other people out there.”

Posted by Michelle Libby at 12:14 PM No comments: