For years Gorham and Westbrook have had an organization made up of law enforcement officers, community services members and senior citizens called TRIAD. Now, Windham has joined in the efforts to keep seniors safe in its community.


“The main purpose is to reduce the criminal victimization of our seniors and to enhance their quality of life,” said Gorham Police Officer Ted Hatch, who is one of the chairmen for TRIAD.

The name is currently the Gorham/Westbrook TRIAD, but they are working on a new name and a new logo to include Windham. 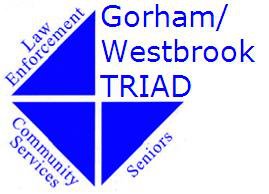 TRIAD is a national organization that works as a partnership between law enforcement agencies, elder care and services organizations and the seniors themselves. TRIAD strives to educate seniors about fraud, identity theft, scams, and communicate with them about services offered and have discussions about issues concerning them.

Windham’s point person for the TRIAD is Windham police officer Tricia Buck. “We can also get sand for seniors, do leaf raking and get free 911 cellphones for medical alerts,” she said.

The TRIAD does “call ins” to check on certain seniors who have not called in by a certain time. They also go on field trips with seniors.

The TRIAD started in 2007 in Gorham, added Westbrook in 2010. Windham has just joined. “We are hoping to extend our reach into another community and grow our base group,” said Hatch. Windham was a good fit “because we listened to one of our members from Windham as well and they are an abutting community with many things to offer to our group as well.”

The group had 30 people at their last meeting, and can fluctuate either way depending on the weather and community events. Hatch would like to see between 50 and 100 people at each meeting. “The more voices we have the better we can serve the aging population,” he said.

Anyone in the community can be involved. The more people the better the group will be. They are looking for “people that are not afraid to pitch in and help with projects, yellow dot events and whatever comes out of the TRIAD that seniors need that we can provide hands with,” Hatch said.

“Anyone is welcome. There is no required age or segment of the population. All we want are folks to join in to help, or share their concerns as seniors,” said Hatch. He did note that they cannot fix some things like transportation needs or other costly items, but they will try to point people in the right direction for help with their issues. From the police officers on the TRIAD to the business partners like AARP, Home Instead, legal services for the elderly and Hospice of Southern Maine, the group is growing and looking to make a difference in Windham.

Funding for the TRIAD is from private donations and grants. They are in charge of The Yellow Dot Program, which helps law enforcement if there is an accident and the people in the car are unresponsive. They also do Seniors in Motion, a program about elder abuse, Santa for a senior,  and create educational videos for seniors that are shown on public cable channels for every town in Maine.

TRIAD meets on the second Friday of each month. This month’s meeting will be at the Windham Police Department on Friday, November 9 at 9 a.m.

Posted by Michelle Libby at 5:06 PM