A day at the State House with Senator Bill Diamond

It was an exciting time at the State House last Thursday, May 23 as I shadowed Sen. Bill Diamond for this “day at the State House” series. On this State House adventure, I got to experience many firsts. It was the first time I could sit in in a caucus meeting. It was the first time where I could witness other conversations and meetings take place where someone like me (“the press”) wouldn’t usually be allowed. It was also the first time I got to see activists in action as the Senate made their decision regarding the religious exemption on vaccinations. “I want you to experience it all,” Diamond said to me. 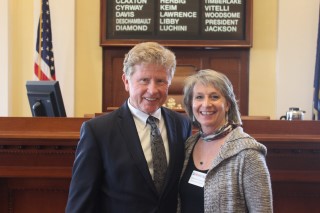 My day with him began at 8:30 a.m. in his first-floor office, which seems to be a “front porch” of the State House. Republicans, Independent and Democrat officials seem to comfortably come and go out of his office to share tid-bits of information or tell a joke or two before the official day began (that usually occurs around 9 a.m. -give or take ½ hour depending upon the demands of everyone’s schedules.)

Anxious to discover what a caucus entailed, I looked forward to the new adventure in my State House series and hoped I didn’t let my excitement show too much. Inside I was smiling like a Cheshire cat. In fact, “caucus” felt like such a mystery to me that I had to look up the term. According to www.senate.gov, a caucus is “an informal organization of members of the House or the Senate, or both, that exists to discuss issues of mutual concern and possibly to perform legislative research and policy planning for its members.”

And that is all it entailed. Of course, as a member of the press I was asked that no quotations be used in this article. But I must say – if I did use specific quotes – it would not have made big news and would not have turned any heads. In fact, I found the conversations to be respectful of those who were not in the room – even in the midst of different perspectives on certain subjects. Maybe they were on good behavior because of my presence (as well as the five or six other visitors in the room) but on the day of my visit - authentic, respectful and well-thought out conversations ensued.

From there – I followed Sen. Diamond up three flights of stairs and down the hallway to the Senate floor. It was an intense day and the hallway was filled with families holding signs, pleading the senators to vote in favor of religious exemptions for vaccinations. Another hot topic of the day was allowing nurse practitioners, physician assistants and nurse midwives to provide abortion services.

These two issues were among a multitude of subjects the senators had to consider that day and, as a result, the House was in session for over four hours to discuss and vote on these subjects. In case you were wondering and didn’t catch the latest news updates, the Senate voted to not allow religion as an exemption of vaccinations and voted for other medical advisors as described above to perform abortions.

From the Senate floor, I then followed Sen. Diamond as we rushed back to his office where we met two representatives of the Maine State Department of Transportation. The meeting lasted for about ½ hour and then Sen. Diamond and I entered the Transportation Committee meeting of which he is the chair (and Rep. Mark Bryant is a member). I witnessed the meeting for only about 45 minutes and had to leave at 3:15 p.m. Neither Sen. Diamond or I had eaten in almost 7 hours, and I was starving.

But luckily for me, I had a meeting at 4:30 at an outdoor restaurant in Portland. It was the first morsel of food I had all day and I wondered how Sen. Diamond was faring without food as I ate my first French fry along the shores of Casco bay. “Had he had a chance to eat yet,” I wondered.

This is the last of this State House series and I have had the honor to follow Rep. Sue Austin and Rep. Jess Fay of Raymond as well as Rep. Mark Bryant and Rep. Patrick Corey of Windham. They all have been amazing – answering my questions and accommodating me as I “shadowed” them. They were welcoming and openly answered all my questions. I personally feel lucky to have such amazing – and VERY hardworking delegates in our midst! And - Sen. Diamond is among them.